If you are looking for information on cockatiels, you have come to the right site. This website has been growing over the last six years and I keep updating it with all the information that I can on that wonderful creature, the cockatiel.

I have also been studying various other members of the parrot family which I have also started including, but primarily this site is a site aimed to give you information on cockatiels. 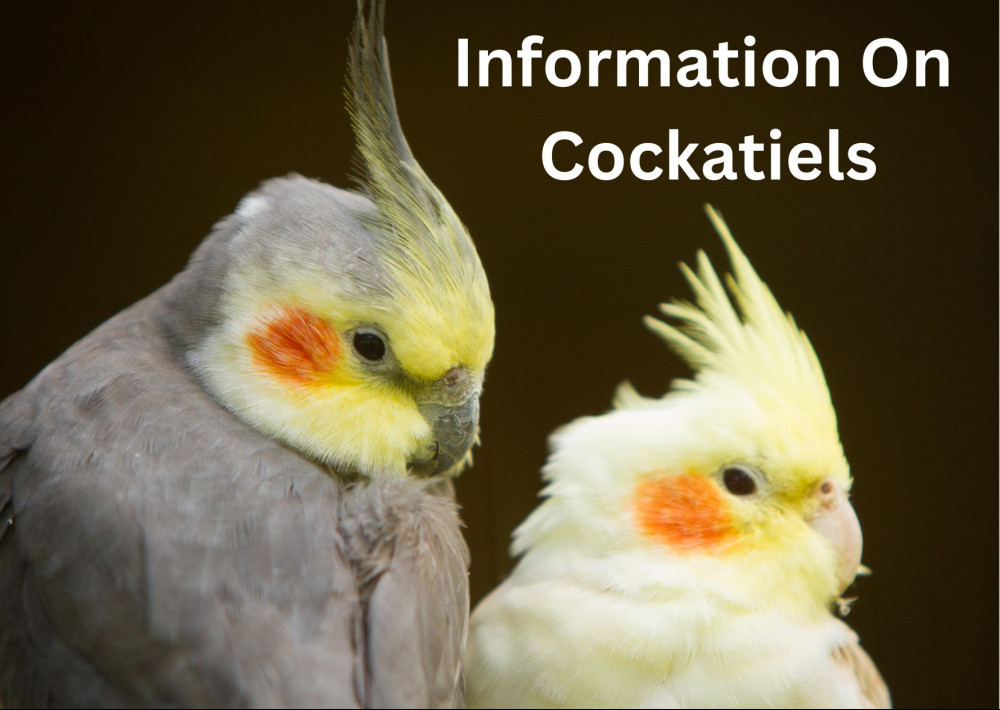 To find out more about these super cute birds, I have a few resources that you can read on this website.

How To Teach A Cockatiel To Talk

How To Sex A Cockatiel

An A – Z On Cockatiels

Why Do Cockatiels Scream?

How To Bond With Your Cockatiel

What Are Cockatiels Exactly?

And last but not least,

Why I Love Cockatiels

So any information on cockatiels that you are looking for you should be able to find somewhere on this site.

It is a medium-sized parrot (more on the small medium size scale) that is a member of its own branch of the cockatoo family and they originate in Australia where they favor the wetlands, scrublands, and bush.

Cockatiels are wonderful household pets and companion parrots and are relatively easy to breed, look after, and train. They are second in popularity only to the budgerigar.

The cockatiel is the only member of the genus Nymphicus. It was previously unclear whether the cockatiel was a crested parakeet or a small cockatoo; however, more recent molecular studies have assigned it to its own subfamily, called Nymphicinae.

The cockatiel has a distinctive crest on its head that expresses the bird’s emotional state.

The crest is dramatically vertical when the cockatiel is startled or excited, gently oblique in its neutral or relaxed state, and flattened close to the head when the animal is angry or defensive.

The crest is also held flat but protrudes outward in the back when the cockatiel is trying to appear alluring or flirtatious.

When the cockatiel is tired, the crest is seen positioned halfway upwards, with the tip of the crest usually curling upwards

Unlike other larger cockatoos, the cockatiel has long tail feathers roughly making up half of its total length. At 30 to 33 cm (12 to 13 in).

A cockatiel is the smallest of the cockatoos which are generally larger at between 30 and 60 cm (12 and 24 in).

The “normal grey” or “wild-type” cockatiel’s plumage is primarily grey with prominent white flashes on the outer edges of each wing.

The face of the male is yellow or white, while the face of the female is primarily grey or light grey, and both sexes feature a round orange area over both ears, often referred to as “cheddar cheeks”.

This orange coloration is generally very bright in adult males, and often quite muted in the females. Visual sexing is often possible with this variant of the bird.

Cockatiels are relatively vocal birds, the calls of the male being more varied than that of the female, which is why the males can be taught to talk and sing. Cockatiels have also learned to imitate certain human or environmental sounds without being taught how to do so. 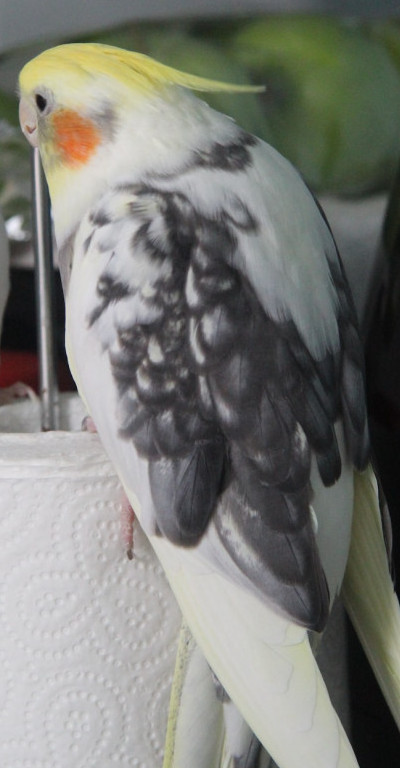 Worldwide there are currently twenty-two known cockatiel color mutations established in aviculture, of which eight are exclusive to Australia.

Mutations in captivity have emerged in various colors, with some being very different from those observed in nature.

Wild cockatiels are grey with visible differences between males and females as described above. Juveniles and young cockatiels tend to look like females with pinker beaks.

The pied mutation first appeared in California in 1949. This combination is a blotch of color on an otherwise solidly colored bird. For example, this may appear as a grey blotch on a yellow cockatiel.

Lutino cockatiels were first seen in 1958.

These birds lack the grey of their wild counterparts and are white to soft yellow. This is a popular color choice and due to being inbred, these birds often have a small bald patch behind their crests.

The cinnamon mutation, was first seen in the 1950s, and is very similar in appearance to the grey; however, these birds have a warmer, browner coloring.

Pearling was first seen in 1967. This is seen as a feather of one color with a different colored edge, such as grey feathers with yellow tips. This interesting pattern is on a bird’s wings or back.

The albino color mutation is a lack of pigment and they are normally white with red eyes.

Fallow cockatiels first appeared sometime in the 1970s. This combination shows as a bird with cinnamon coloring with yellow sections.

Cockatiel color mutations can become even more complex as one bird can have multiple color mutations. For example, a yellow lutino cockatiel may have pearling with white spots on its back and wings. This is a double mutation.

An example of a quadruple mutation would be cinnamon cockatiel with yellow face coloring with pearling and pied markings.

How Long Does A Cockatiel Live For?

A cockatiel in captivity can live anywhere between 16 to 25 years if he is well cared for. There are birds that have lived into their thirties, with the oldest report so far has been 36 years.