If you had to examine a lot of male cockatiels, you will notice that there is a lot of variation in the amount of yellow present on their heads in different cockatiels. As you know the male birds are the ones that have the bright yellow that is talked about when we mention yellow cockatiel birds, and in this post I will examine yellow cockatiel birds and how they came to be.

The yellow on a cockatiels head is at its deepest around and above the bill and in the forepart of the crest. The yellow then fades as it approaches the patch of orange on the ear-coverts.

The pallest birds have no yellow behind this cheek patch and this part of the head is normally white.

The intensitiy of the yellow cockatiel chick is ultimately that of the adult. Deep yellow chicks make deep yellow adults and vice versa.

The relationship between the orange of the cheeks and the yellow of the face is very close. Many times the darker yellow birds have an occasional orange-colored feather scattered about the face. The darker yellow the bird, the brighter the orange and the more frequent these feathers will be.

Experience proves that cockatiels can be selected for their richness of yellow, but the genetics is complicated by the seemingly high number of genes involved.

It is believed that about four shades of yellow cockatiel birds exist, with the most comon being the palest of all. In the normal cockatiel the low dose of yellow gives males a great deal of white behind the ear patch.

In lutinos this low dose of yellow gives a near white bird, and despite the factor for pieds intensifying yellow, the harlequin patches are white. In cinamons and red-eyed silvers the color is very diluted greyish, silvery brown. 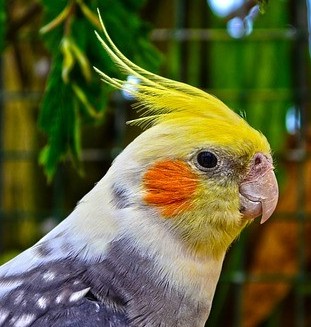 The opaline or laced cockatiel is not particulary striking either.

The rarest combination of genes for the yellowness produces the deep yellow, bright yellow lutinos, very pretty opalines, the cinnamons and red-eyed silvers with a rather nice yellow suffusion.

The intermediate combinations of genes for yellowness give two stages between these extremes.

As so much the beauty of the mutations described in the next few posts is greatly enriched by the intensity of the yellow background. Selection for breeding should always be made with this in mind.

In the nestling, the deepest yellows can be noted by the shade of the down.

The number of genes involved and the compound effect of their massed numbers mean that selection is best done by eye rather than by a simple adherence to genetic principles and theory.

The golden rule when breeding cockatiels is to reject all pale birds for breeding, no matter what ever other merits they might have.

Cockatiel mutations and how they have come about can be read about in more depth here.