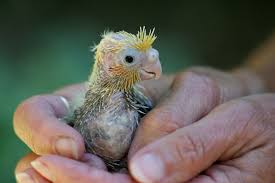 Dangers To Watch Out For With The Cockatiel Chick

The most dangerous time in the cockatiel chick’s life is the first three days after hatching.

Death of the cockatiel chick can be due to many causes, including such accidents as being trapped inside its own hatching egg, as the egg of an earlier hatched egg can get in the way of its shell.

This is one good reason why you should remove all the eggshells from the nest.

Other chicks get infected through the yolk sac cord or a misshapen or are deformed in some way.

The most common cause of death of the cockatiel chick is that they are not fed by their parents.

This sometimes happens because they are weak from cold and are too inert to plead for food.

These chicks if taken into a warm place like an incubator and artificially fed for a few days can then be returned to the parents provided that other chicks, or eggs, are still present in the nest. 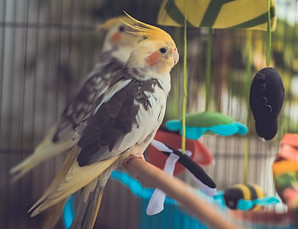 Make sure that nest boxes are cleaned well between breeding rounds. This means scrubbing them well and rinsing them off with a mild disinfectant.

To dry let the sunshine directly into the box.

Any sawdust or other material that you want to use as a nest-box filler must be fresh and dry.

Aspergillosis is a fatal respiratory disease. This has been known to happen to cockatiel chicks in which garden compost had been used as bedding.

Another of the more critical periods is when the chicks are ten days or so old and they are just beginning to quill up.

This is when the parents tend to leave them alone for part of the day.

On several occasions, dead chicks of this age have been shown to have died of a ruptured liver caused by one of the parents clumsily dropping onto the chick instead of climbing down the wire ladder inside the box.

This is why boxes should not be built too deeply.

Often, however, postmortem examination shows that the liver and kidneys are noticeably enlarged and very pale. They are almost a creamy pink in colour, while the body contains a lot of excess fat.

Such chicks, like the surviving ones, are particularly well-grown and well cared for.

An exactly similar appearance in growing poultry is called ‘fatty liver and kidney syndrome.’ The exact cause of this may vary, but usually comes from high energy rations and a diet that is poor in biotin. This disease is rare in parrots that have been fed green food.

Sometimes the cockatiel chick gets rickets. This is a bone disease of the young. The two main causes of rickets is a lack of sufficient vitamin D or calcium in the diet.

In rickets, the growing bone is softer than normal and bends when the chick moves to give it distorted limbs. This is most apparent in the legs.

Affected chicks often cannot climb out of the box when they are fledgelings. Others die as they begin to feather.

Some that do leave can fly only a very little distance before crashing to the floor. If placed on a perch they topple off because they cannot grip with their feet.

When held in the hand, the joints of rickety cockatiels are noticeably thicker than normal and the legs are seen to bend inwards.

The least affected chicks will grow slightly better with time, but if they are really bad, it is better to put an end to their misery.

Rickets is preventable. Parent cockatiels often consume a whole cuttlebone a week when they are feeding chicks to provide the chicks with enough calcium.

Milk will also give both calcium and vitamin D and one or two slices of bread steeped in milk will be eaten daily by a pair with a large brood.

In at least one instance rickets has been attributed to the parents feeding the youngsters almost entirely on oats.

Oat seed can contain high levels of phytin which binds to calcium in the bowel of the bird and prevents it from being absorbed.

I hope that this article about the cockatiel chick is a help to all our cockatiel breeders out there.