If you breed birds, there will be times that the only way of saving the chicks will be by hand rearing birds.

Other reasons for hand rearing birds is to get them tame and make them into more placid pets. You can actually sell hand-reared parrots for a lot more than you would their counterparts, as they are already tamed, and people are generally lazy to tame their pets themselves.

In this post, I am going to talk mainly about hand rearing birds from the parrot family.

Hand rearing birds from the parrot family is not quite as tedious a task as you might have imagined.

Because parrot chicks have very large crops, they only need feeding four or five times a day, and later when they are beginning to feather, only about three times.

Admittedly, they may benefit more if the meals came a bit more frequently than this. 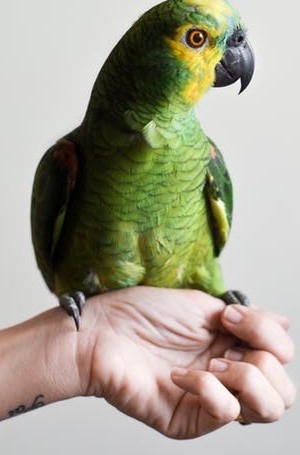 Apart from food, the very young chicks need to be kept warm until they are three weeks old, so an incubator would be perfect for this.

If the chicks are too cold, they will not feed with any enthusiasm, nor can they digest their food efficiently. They thus run the chance of either dying or growing really slowly.

For the first week, the chicks can be kept at 95 to 100 degrees Fahrenheit.

You can drop to 80 degrees Fahrenheit at the end of the second week.

If the chicks are too warm, they will pant and take on a rich pink colour. If this happens, drop the temperature by 5 degrees Fahrenheit.

A nest made from a small cardboard box and lined with paper napkins is ideal to house them in at first.

If an incubator is not available for the cardboard box, then place in an airing cupboard.

Another method is to put the small cardboard box, containing the chicks inside a somewhat larger box. Place a hot-water bottle filled with water slightly higher in temperature than blood heat into the larger box. The larger box can then be draped with a towel or polystyrene tiles to retain the heat and it ought to remain warm for eight hours or so.

Ventilation is also necessary and the paper napkins should be replaced as they get soiled.

When parent cockatiels feed their young it is on a diet of canary seed, millet and sunflower seed, which has been regurgitated. But as humans, we would have to get the husk out of the seeds, which makes the food preparation quite tedious.

This is actually unnecessary nowadays as we have several really excellent preparations for feeding human babies that are based upon ground vegetable grains and which are further supplemented with minerals, milk protein and vitamins.

These cereal type baby foods are compounded to give a complete diet and may be mixed with either water or milk.

No extra minerals or vitamins need to be added, but nothing is stopping you from adding carrots, fruits or vegetable juices instead of water.

With very small chicks the mixture should be quite moist.

Both the foods and the mechanical means of feeding like a spoon or syringe must be warm, or else the chicks won’t swallow.

Most parrots don’t gape their beaks wide for food like other bird species.

The food is normally fed to the babies with the parent taking a light hold with its bill on that of the chick while its tongue spoons regurgitated food into the chick’s partly opened bill.

While the chicks are being fed they chirrup and vigorously bob their heads.

A person hand feeding a cockatiel has to feed the chick through a long narrow opening like a syringe. The beak is touched or slightly squeezed between two fingertips.  This should make the cockatiel chick bob its head and make swallowing movements. If not then try putting the food forcibly, but gently, in at the angle of the birds’ mouth.

If you find a syringe difficult, try a child’s paintbrush to scoop the food up and in. You could also try a teaspoon with its sides crushed in to pour the food into the bill.

The crop of a chick in the nest is not always full, nevertheless, the aim in hand-rearing should be not to let the crop remain empty for too long.

There is no need to wake during the night to feed the chicks if the crops are well filled in the evening.

The amount of light allowed to reach the chicks can be increased once their eyes start to open and they will soon come to recognize the person feeding them and will chortle for food when they see the syringe or spoon used to feed them.

If the weather is very dry it can be helpful if the chicks are given fresh water to drink after they have been fed.

The chick will often take water when thirsty and will then refuse food, so rather feed them first.

The chicks must be handled during the rearing to make them as tame and confident around humans as possible. 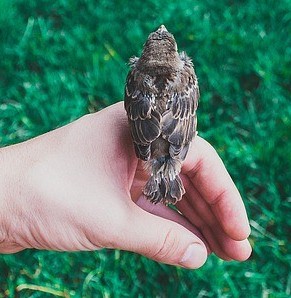 The beak must be kept clean, because if the food is allowed to become impacted on its surface, it may cause ulcers or worse deform the mandibles.

As with chicks in the nest, the feet must be frequently examined to make certain that they are not clogged with dry faeces.

The most trying period in hand-rearing is often the weaning.

Young birds that are artificially reared often seem to be tardier in learning about what real food is than are their naturally reared friends.

Once the chicks are five weeks old they must always have some seed in the cage with them, as well as a millet spray with some green food so that they can be encouraged to try and feed on their own.

Try this after hand feeding. A grain of sunflower can be offered in the fingers. They will often take this and mouth it before putting it down.

By this slight practice, it will attract their attention to grains and seeds.

Putting them with another young cockatiel, who has already learned to eat for itself will get the chicks started a bit quicker.

Eventually, all hand reared chicks give up begging and take to self-feeding, even though it may seem that yours will prove to be the exception.

By the time they are seven weeks old they should be eating by themselves and the job of hand rearing birds comes to an abrupt end.