The wild-type or so-called “normal” cockatiel has only two colors – yellow and black.

The general grey feather results from a mixing of black and white or black and yellow.

When a feather that would otherwise be grey lacks yellow, it is black.

Likewise, if a feather that should be grey has no black, then it will be yellow.

As yet, no one seems to have given the yellow color a name. 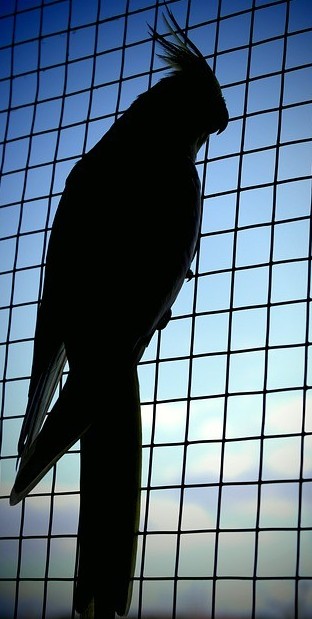 It has sometimes wrongly been called a carotenoid pigment. Carotenoids are taken directly from plant tissues and require little modification by the birds.

However, the yellow of parrots is seemingly quite distinct from this and is completely synthesized by the parrot.

It may be exclusive to this order of birds.

Yellow must be fairly easily synthesized by the cockatiel and other parrots from the most simple of diets because nothing seems to affect its intensity.

It may seem quite odd considering the enormous variety of colors available in parrots, that their oranges, reds, blues, greens and purples are formed of the same black and yellow.

The blue found in parrots is not a pigment but results from a layer of colorless and extremely minute microscopic rods running over a central core of the black pigment.

Blue is the consequence of light striking this refracting layer, and the green comes from the mixing the blue with the yellow.

There is a good reason to assume that red and orange are simple chemical modifications of yellow, and they will be treated as if they were the same.

The breeding of cockatiels for improvements in their color, or for the development of completely new color forms can add a fascinating depth of the bird-keeping hobby and it can also be very profitable.