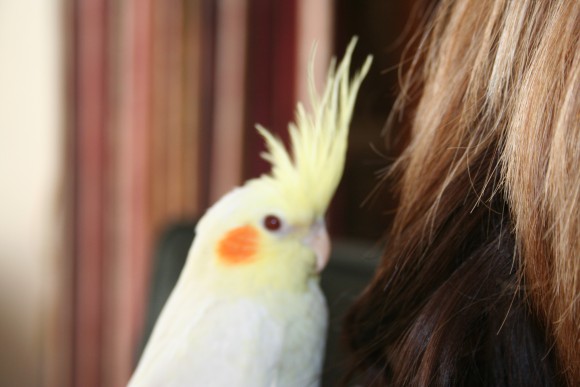 The cockatiel is a medium-sized Australian parrot with an erectile crest on the top of its head.  It has so readily taken to captivity that it is now extremely well-known as both a cage and aviary bird.  Cockatiels make the most wonderful pets, and I have owned them all of my life.  The Cockatiel is the one pet I am never without.

The cockatiel is the smallest member of the cockatoo family, and is also a small bird in relation to the rest of the parrot family (As you can see in the picture, taken of my cockatiel sitting next to my bare-faced cockatoe).  It is however bigger than a budgerigar.  You could say that a cockatiel is the same size as a starling, although it does have a much longer tail.

Cockatiels that are found in the wild are normally grey in color with a white band of feathers on the wing, and a pretty patch of bright marigold-orange on the cheek.  The head is capped by a crest and the bill, eyes and feet are black or grey.

The coloring of the adult sexes is very different.  The hens look as though they have a grey wash which covers the yellow and marigold colours of the head.  As youngsters you can’t tell the difference.  As cockatiels grow the male gets a more vibrant coloring in the face.  The females tend to carry more coloring on the tail in the form of yellow bars and spots.

The white Latino cockatiels came into being in Florida in 1958.  This form of cockatiel, as well as the pied mixtures are all forms of in house breeding, and not from the wild variety.
By the late 1960’s people tried to buy the most unusual colored cockatiels that they could.  The cockatiel trade was huge business in the 1960’s, and there were often waiting lists to acquire these white Latino cockatiels which were so rare at the time.  The Dutch and Belgian people took it a step further by breeding the canary shaded cockatiel.

By 1975 the market for these birds settled again, as there were many more stocks of them around.  In several ways this money-making phase for the cockatiel has been extremely beneficial for aviculture.  It has brought the breeding of captive parrots from a hit or miss affair to become practically a science.

This changed a lot of mindsets, as breeders for the first time began to give thought to the nutrition of the birds, and began to supervise the entire breeding cycle, by providing suitable nesting boxes, and hand rearing the chicks.