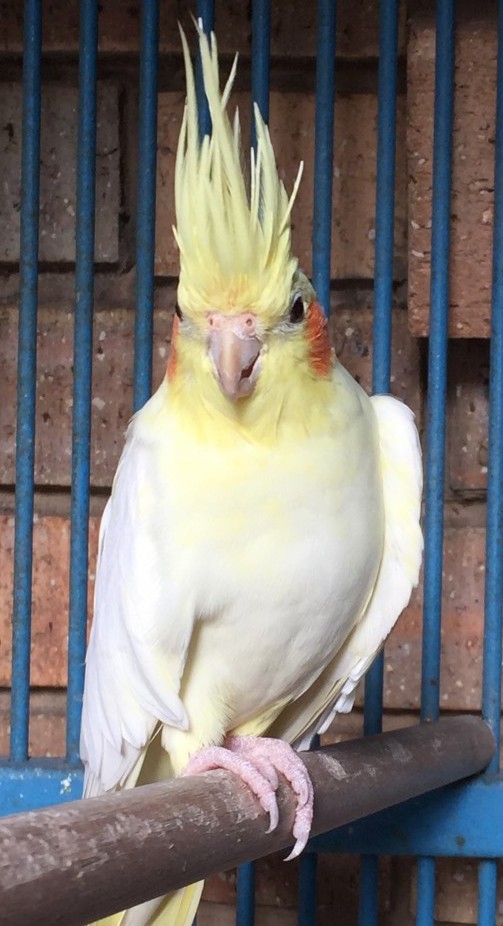 The Lutino Cockatiel was the second cockatiel mutation to be established.

History Of The Lutino Cockatiel

Unlike the pied cockatiel, the Lutino Cockatiel immediately took the avicultural world by storm because it looked so like a miniature white cockatoo with a pale yellow breast and an almost white body, tail, and wings.

Its head and crest were primrose yellow and both sexes had a brilliant marigold-red patch on the cheek.

It is difficult to tell a male from a female, and the photo on the right is of my own female Lutino Cockatiel.

The dull and drab grey duckling that is a normal cockatiel has, with this mutation, become a beautiful white swan.

Lutino Cockatiels are by far the most successful mutation in terms of numbers bred and for their beauty.

It seems a tragedy that these pale yellow cockatiels were first described as ‘albinos’ because it left people satisfied with what were after all insipid-looking near-whites.

The avicultural term of ‘lutino cockatiel’ is used for that special type of albinism in which, although completely unable to synthesize melanin, the bird can still produce yellow and red pigmentation.

Fortunately, some of the more perceptive of the European breeders put some effort into getting increasing amounts of yellow into the plumage, but the issue became confused because these improved lutinos began to be known as ‘Primrose,’ ‘yellow,’ or ‘real lutinos,’ as if a totally new mutation had been conjured up.

The present world stock of that must be by now more than ten thousand (including those in Australian aviaries; remember that Australians have not been allowed to import birds, except from neighboring New Zealand, since the late 1940’s) are descended from a single seemingly normal cock bird owned by Mr. Cliff Barringer of Miami, Florida.

This surprise occurred in 1958. The following year, the parents produced two more of these unique birds. Strange as it must now seem, no attempt seems to have been made to breed from the normal nest mates, for approximately half of the seemingly normal sons of this parent male would have also bred lutinos.

Indeed, it took two years for Mr. Barringer to produce the first male lutino by mating one of the lutino daughters back to her father.

It seems that the following year Mrs. E.L. Moon, who used to be the curator of the Florida Parrot Jungle, acquired the nucleus of Mr. Barringer’s stock and it was from her subsequently named ‘moonbeams’ that the Lutino Cockatiel eventually spread throughout the world.

Mrs. Moon wrote a book entitled Experiences with My Cockatiels.

Click on the book to find out how you can obtain your own copy.

How The Mutation Works 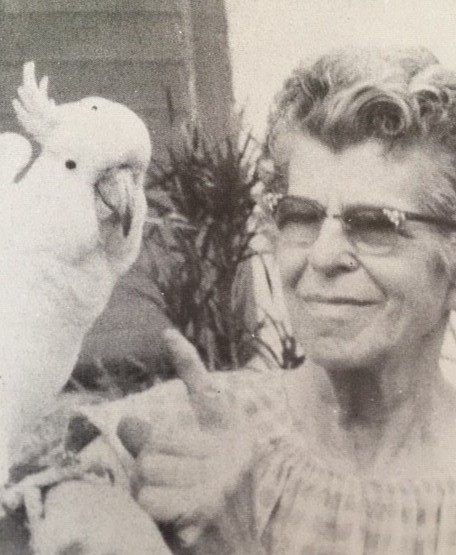 Mrs. Moon with a Sulphur-Crested Cockatoo

The mutation of lutino is common in several species of parrot.

The black, brown, purple and blue colors of parrots depend upon the presence in the feathers of the black granular pigment called melanin. Where the melanin is covered by a layer of submicroscopic rods that refract light, the feather looks blue.

If a superficial layer of yellow covers this refractive layer, then the feather, because it is both blue and yellow, appears to be green.

In cockatiels, Pesquet’s parrot and in cockatoos the refractive layer possessed by other parrots is not developed and the yellow and black working together gives the grey appearance.

If the bird cannot synthesize melanin, then the yellow pigments remain to make it a lutino and not an albino. An Albino is pure, clean white with no other colors on any part of the body whatsoever.

The ability of the body to form melanin is notoriously liable to be altered by some genetic mutation. There can hardly be any tame species of animal that as not been known to have albino, pied, red or even completely black individuals such as white crows, sparrows, ginger cats, albino guppies, black panthers, white mice, etc.

These animals owe their very frequency, as well as their considerable variation to the biochemical fact that the black granular melanin is only made after a chain of separate biochemical processes, have taken place. Each intermediate process in the chain requires a distinct enzyme. It is believed that genes are ultimately responsible for making enzymes.

Therefore, a genetic mutation affecting any one of several genes will affect the production of melanin.

Depending on the gene, each mutation could give a slightly different, as well as the same, effect on the finished melanin.

All the known mutations of cockatiels affect the formation of melanin, but the end result is different in all cases. Thus, we have fallows, opalines, cinnamons, lutinos, and pieds.

It is perfectly straightforward to pair a lutino to a normal cockatiel as there is no chance of losing the factor in uncertainty about whether youngsters will bear the gene or not.

Nevertheless, the early breeders seemingly paid slight interest to increase fertility, vigor or the depth of yellow by outcrossing.

Indeed, they often did quite the opposite. For example, someone quite early mated lutinos into a line of cockatiels that were genetically bald. Baldness, fortunately, is dominant in its inheritance and can be eliminated very simply by avoiding breeding from any affected bird. When two bald birds are paired together, some of their progeny will have two genes for baldness. Instead of having, as with the single gene, a small patch without feathers on the nape of the head posterior to the crest, these have an ugly bare nape sometimes as large as the end joint of the thumb.

The early lutinos arose in a string that had a low quote of genes for yellow and was not always fertile. Some of this infertility was because the males had an inborn defect of behavior that made them uncertain as to which direction to face when pairing with the hen. Such a male would mount the hen and then turn first this way and then that, then lower himself to pair facing quite the wrong way around. Most eggs, thus, were infertile.

Lutino Cockatiels and Their Sensitive Eyes

The inability to make melanin in a lutino is not confined to the feathers, because usually, the feet, skin, and eyes are also pink. The pink color of these tissues is that of the blood flowing through them. 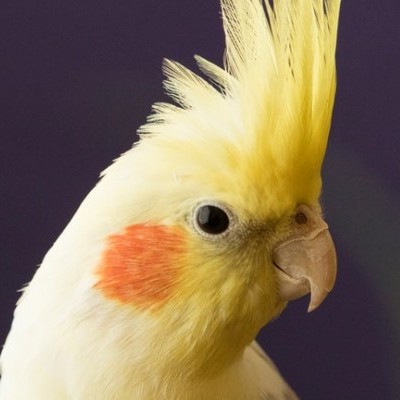 It has been reported that some lutino cockatiels have black eyes. This is curious, but in a lot of these cockatiels, it has been found that the eyes have suffered from hemorrhage or some other damage so that the resulting scar-tissue interferes with the normal passage of light through the eye.

These birds could also possess some modifying gene, or genes, that pigments the eye. Whatever the explanation (and it will take a microscopical examination of a dead cockatiel’s eye to find out. The so-called ‘black-eyed lutino’ is most definitely not a separate mutation from Mr. Barringer’s original Lutino Cockatiel.

To function normally, the inside of the eye has to have a heavy layer of melanin to completely soak up the superfluous light entering the eye.

The lutino cockatiel must have very poor vision because its eyes have no melanin. It can manage well enough in poor light, however, on a very bright day, it can become quite blinded.

The shelter and the nest-box will give them protection from the bright light, but young birds after fledgling may spend most of their time in flight, and permanent damage might be done to their vision.

It is wise to keep young Lutino’s indoors or in shaded aviaries, particularly in bright weather.