Most people refer to eggs that have gone bad as addled eggs or eggs that are addled. This is the true meaning of addled when it comes to breeding birds.

I was wondering why some eggs just don’t hatch, no matter how good the parents are with incubating them. So I decided to do some research and this is what I found. 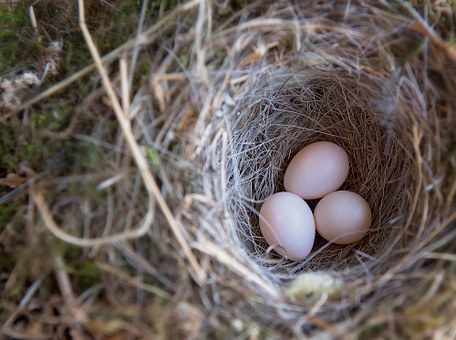 What Are Addled Eggs?

When the embryo contained in an egg dies at a very early stage after laying, the egg is said to be addled.

On the other hand, if the embryo dies later, so that is it clearly identifiable as a chick, it is said to be ‘dead-in-shell.’

The words addled eggs are often misused when describing an infertile egg because in this case, the embryo has never begun to grow in the first place.

‘Bad eggs’ are those infected by bacteria and are usually the consequence of the eggshell being cracked or because the shell is porous.

Eggs can get cracked if there is not sufficient litter in the base of the nest to prevent the eggs from rolling against each other.

Cracked eggs also happen when the parents are wild and easily disturbed.

When egg shells are porous, the following could have occurred:

Death of the embryo and addled eggs can sometimes be the consequence of bad patterns of incubation, usually because one of the parents is less broody.

The early death of the embryo, giving rise to addled eggs is usually ascribed to an insufficiency of various vitamins, proteins, and minerals, but most particularly to a lack of Vitamin B.

Inbreeding and so introducing recessive genes are also responsible for debilitating, deforming or even killing the chick at an early age may also be considered.

Dead-in-shell is usually said to be caused by the nest-box being too dry. Desiccation makes the incubating egg lose too much water to the atmosphere. The chick is then weakened and cannot break out of the egg.

This the above theory may not always be true. Several times during their incubation parent cockatiels soak themselves with water. This dousing seems to be the natural way of moistening eggs, as after all in the wild cockatiels naturally use very dry holes in trees.

Dead-in-shell is most common in the colder months of the year and is aggravated by bad parents.

Even parrot breeders who use peat, which is a moist nest-box filler have just as high an incidence of addled eggs or dead-in-shell, if not higher, as those that give no moistening agent.

Dead-in-shell is likewise more common in draughty or thin walled boxes than in well-made substantial ones.

For more on eggs and breeding cockatiels, you can click here.