So What Is A Pied Cockatiel?

Visually the pied cockatiel is extremely variable in the effect that it produces and there is no means that might be used to select for an increased effect. In other words, parent cockatiels with very well-marked plumage stand no greater chance of producing beautifully patterned youngsters that would the mating of the most ill-marked cockatiels.

Pied cockatiels are all so different that an exceptional bird might be almost lacking any normal feathers and therefore may even appear totally white, while another may have only a few white feathers and be otherwise grey. 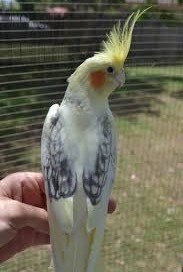 These extremes are very rare, and most pied cockatiels will have some pied patches to the head, usually on the crown and cheeks. The rump is normally also affected as are some of the flight feathers and parts of the tail.

The cockatiel on the right is better characterized as a pearl pied cockatiel.

The second effect of the pied cockatiel gene is to cause those flight and tail feathers that are whitened to carry a broad spread of yellow pigment rather than the usual barring.

This yellow is not lost when the males mature. Sometimes it is not only the head that is left with sufficient grey with which to determine the sex. In this case, females may still have the orange ear patches obscured by the grey.

Unfortunately, this has happened with practically all the mutations, no one thought to record their early history.

What is certain though is that it was already established by Mr. D Putnam of San Diego, California sometime before 1951.

After the death of Mr. Putnam his stock was acquired by Mr. Hubbell, who carried on breeding them.

Coincidentally, as Mr. Putnam was working on his strain, Mrs. R Kersh was building up another.

It is not known whether these mutations were entirely disconnected, but it is reasonable to assume that both stemmed from the same mutation of some years previous that has been passed, unnoticed, from parent cockatiel to offspring, although never producing any pieds for lack of the necessary inbreeding.

All we know is that Mrs. Kersh’s foundation bird was bought from a pet store.

It does appear that most of the European pied cockatiels came from `Mrs. Kersh’s stock.

The early history of breeding for pied cockatiels suggest an extremely high degree of inefficiency or of sterility among the birds, as in the first twenty years extremely few had been bred.

One likely explanation is that there is always a tendency to select for color in autosomal recessives by mating pieds to split pied birds.

In practice, this invariably brings close inbreeding. The mating of close relatives is likely to introduce other genes that may interfere with viability or fertility.

Whatever the reason, the world total of pied cockatiels in 1968, may well not have exceeded one hundred birds, and they sold for a minimum of $100 in the United States and for approximately twice this sum in Europe.

The most perfect pied would have a complete symmetry to its patches. This could well be almost impossible to achieve. 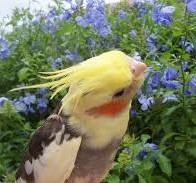 Likewise, the pale areas are at their most attractive when they are clear cut with a sharp demarcation between the grey and white. The deeper the yellow background, the more attractive the pied cockatiel is.

Although the Opaline, Lutino and the Cinnamon cockatiels are sex-linked, the pied is not.

Before a pied can be produced, both its parents must carry the factor and this mode of inheritance is more common than sex-linkage.