The opaline, laced and the pearl cockatiel are often one and the same thing. Germans described the cockatiels as opaline (especially the budgerigar) or pearled and the Polish and English refer to the same cockatiel as laced.

Normally the nape of the head, the mantle, and the upper wing coverts are the only feathers affected, however, it does deem to replicate the opaline look of budgerigars.

The first opaline cockatiel occurred in West Germany in 1967 or perhaps in 1968, but the exact details are difficult to find. 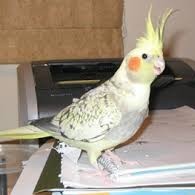 Rumour has it that the same mutation was found in Belgian cockatiels a year later.

The feathers affected by this mutation are unable to reproduce melanin in the central portion of the vane. This results in a pale patch on either side of the feather shaft. The effect is somewhat variable in how any individual cockatiel will be affected.

in the better examples of the pearl cockatiel, there is a narrow border of dark grey which surrounds a white or yellow feather to give a really beautiful scalloped pattern.

Unfortunately, with most cockatiels, it seems that they have less melanin loss to the feathers and the bird has a marbled appearance. In the worst examples, the cockatiel looks spotted or smudged.

When the basic yellow background color is a deep yellow then the contrast with the grey makes them especially pretty. These mutations have been called gold-laced.

When the yellow is very weak, the cockatiel is known as silver-laced. This, however, doesn’t mean that they are different mutations. 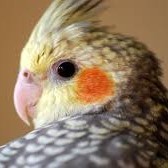 Youngsters from the same nest are rarely exactly alike and parents that have produced beautifully marked youngsters one year may not repeat the same success the next year. So it is potluck for breeders trying to get the perfect pearl cockatiel.

Two well-marked parents have no greater chance of producing well-marked youngsters than two ill-marked birds would.

One feature that is strange is those male opaline cockatiels when they molt for the first time, lose their lacings. This happens because one of the secondary sexual characteristics of male cockatiels is to lay down a higher density of melanin than do females or matures.

The female pearl cockatiels usually keep their markings throughout their life span.

The extra black melanin of maturity, therefore, obscures the pearl cockatiel effect, but not quite completely, for if a close examination is given it will usually be found that the shoulder features look paler as if they were slightly soiled. 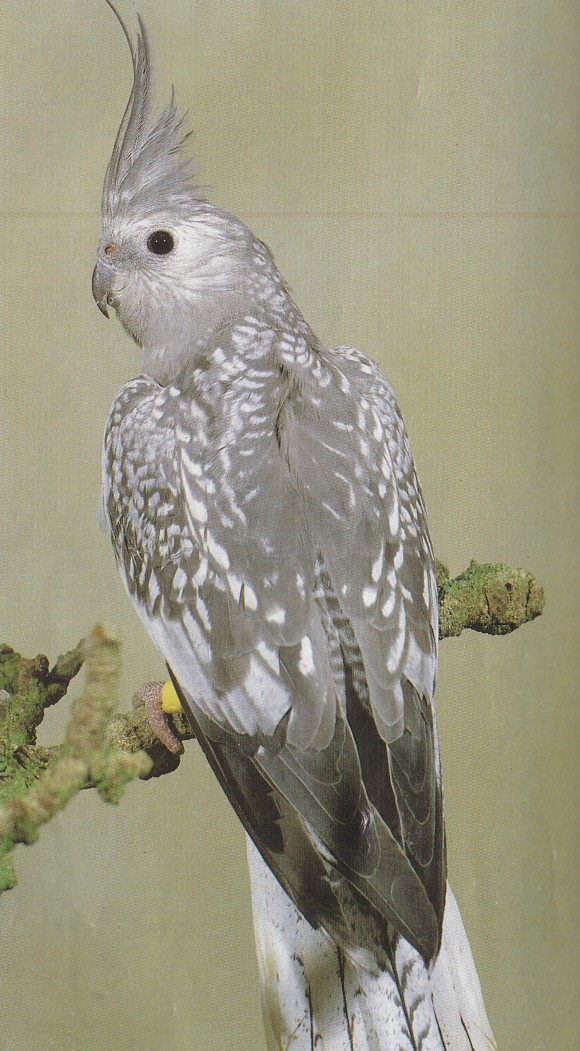 It has been reported that in some cases old pearled males regain some of their laced feathers. It does seem very likely that selective breeding would reduce the amount of melanin deposited in the feathers of adult males.

Mrs. E. L. Moon selectively bred for paleness most successfully. But normally the male pearl cockatiels are a bit of a disappointment in their looks.

Another interesting fact is that split males can be picked out from normals because they have pale streaks of feathers under the wing near the shoulder joint, giving a mottled effect.

Because the opaline, laced or pearl cockatiel is another of the sex-linked mutations, it is easy to breed in quantity. However, it is particularly important to remember as a breeder which chicks have the markings, as because when they become adults there will be difficulty distinguishing adult male opalines from normal grey cockatiels.

The Pearl Cockatiel, just like other cockatiel species, loves to climb perches and play inside its cage. Thus, it would be best for you to provide them with perches and various toys to enhance these habits and practices.

Additionally, let them spend some time away from their cage if you have the chance to do so.

Aside from that, cockatiels whistle and imitate speech. This is most evident in male pearl cockatiels. Telling whether a pearl cockatiel is male or female could be hard until the males lose their pearl complexion after the first molt.

Female cockatiels never lose this coloration, thus this could be your significant indicator. From their initial molt, the males lose their markings and return to gray after several years. The truth is, males never lose markings. It is just that their markings turn so pale that they become invisible.