All my life I have owned birds, well most of it anyway.  The reason that I started this site is because my love story with a cockatiel began when I was still a child.

After my dog Trixie died when I was ten years old, I remember being devastated.  This was my best friend who had grown up with me.  She was born two months before I was and life without her just seemed unlivable.  I think that that was the first time that I really understood the finality of death.  My dad buried Trixie in the back garden, and I would often stare at her grave and picture her rising out of it to come and play with me.

Trixie was the last dog that I ever owned myself. We have had other family dogs since, but none that I have ever been as close with.  A few months later while my dad was working outside his barn at the farm, a cockatiel suddenly landed on his shoulder and wouldn’t leave him.  No one ever claimed him, so we named him Zanadu (after  Movie that was popular at the time), and Zanadu became part of the family living on everyone’s shoulder until we got to town to get him a cage.

He took to living on the shoulder of which ever family member he chose, mainly my father, whom he took a special liking to. Each time he saw my dad he whistled tunes and said pretty boy.  He had a character second to none, but was rather cheeky to us, maybe being scared that as children we would hurt him.

A few months later we went to the pet shop and bought Zanadu a mate.  We called her Zooander, and we watched in amazement when Zooander started saying pretty boy.  Females aren’t supposed to talk!  Well Zooander grew quite colorful, and we were later told that she was actually a he.   Zooander copied everything that Zanadu did, but was a very affectionate cockatiel.  Unlike Zanadu she didn’t mind being with us children.

Years on I have never forgotten those first two cockatiels, and have probably replaced them about five or six times in my lifetime.  Each cockatiel that we acquired after Zanadu, took on his vocabulary and his whistled his tunes.  Although I must admit the original tune is now horribly out of tune with my latest cockatiel. 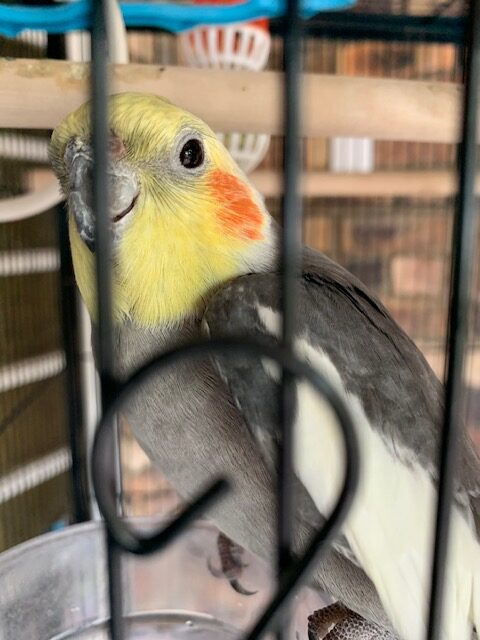 When I moved from Johannesburg to Port Elizabeth, I decided to take on an avairy.  I started breeding cockatiels and budgies, which was rather fun, but the budgies were bullies, and thus far outbred the cockatiels.

I started off with two cockatiels and two budgies and two years later had the original two plus one baby cockatiel and about sixteen budgies which I gave to a friend living on a farm.

When we moved again, I went back to having two cockatiels.  I prefer keeping one or two as you can develop a more personal relationship with them, whereas when they are in an avairy, it is more difficult to make pets out of them.

More often than not my cockatiel couple has been two males.  The pet shops can never seem to tell when they are young what they will grow up into. Nevertheless I have loved them all, but been closer to some than others over the years.

As I have grown up and life has gotten more busy, my cockatiels remain more in their cages than out, but I still enjoy them thoroughly.  I have even expanded my animal family by adding a bare eyed cockatoo to the mix.  She is absolutely terrified of the cockatiels, but seems to enjoy having their company in the cage next to his, and complains like mad when I move them away.

I recently bought a bigger cage and added my two budgies that were given to me by a friend to the mix. The one budgie is besotted with the cockatiels and follows them around all day trying to feed them like they are her babies.

I sadly lost one of my female Lutino cockatiel (well at least I think she was a female) on new years day this year, and I had owned her for over five years. She just got sick and within a day was dead – heartbraking.

I have since bought a lovely baby laced/Pearl baby cockatiel that you can see sitting next to the green and yellow budgie on the picture above.

You can read more about my pet birds here.

Please note that the above post may contain affiliate links.