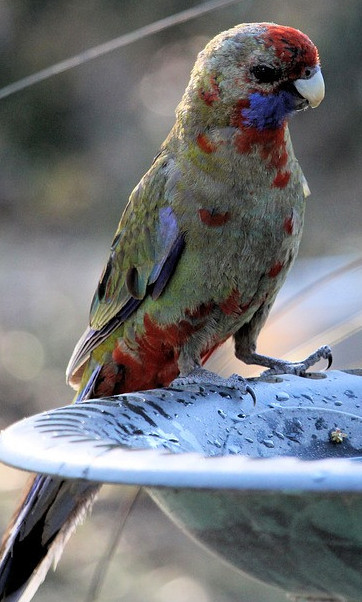 In this post let’s look at how to prevent illness within your bird population, as well as look at some healthy bird treats.

In order to see how you can make your own homemade bird food, click here.

This post contains affiliate links, which means that I will get a small commission if you decide to buy anything on this page, at no extra cost to you the consumer.

Birds are most likely to fall ill soon after being moved to a new home, as they may encounter unfamiliar microbes or may not have been eating properly for several days, which is why it is important that you stock up on some healthy bird treats.

Once established in their quarters, however, and after molting in their new home for the first time, the risk of illness is reduced a lot.

Illness may also arise in a collection where a number of birds are being kept in the same aviary, budgerigars for example, rather than being housed on their own for a pair, as in the case of a pair of parakeets.

Good hygiene plays a vital role in preventing the spread of infection in an aviary where a number of birds are present. This is not just a matter of keeping the aviary floor clean, but also of ensuring that food containers are washed at least twice a week, and using sealed drinkers and hoppers to reduce the likelihood of their contents becoming contaminated with droppings.

Regular measures to control parasites, such as spraying to eliminate any risk of red mite becoming established, are also vital, as it is very difficult to spot any signs until these almost invisible creatures are well established in the aviary environment.

How Do You Know If A Bird Is Sick?

A typical sign of illness in a bird could be ruffled feathers, the inability to sit on a perch, and loss of interest in food.  Often the bird will go and sit down on the bottom of the cage or aviary.

Birds are good at hiding when they are ill, so they need to be watched closely for any signs that they are under the weather.

If a sickness goes undetected, his condition will deteriorate rapidly. If the bird loses its appetite to the point that it is no longer eating, medication has very little opportunity to work successfully.

Luckily there are many products available on the marketplace nowadays that provide for all a bird’s nutritional needs, and these can keep a sick or injured bird alive for weeks, greatly enhancing the likelihood of a successful recovery.

Advice, however, should always be obtained from your avian veterinarian.

How To Cope With A Sick Bird

When you see a sick bird, the first thing to do if it is with other birds is to remove it from the rest of the birds and transfer it to a warm environment.

It is a good idea to have a hospital cage on hand for just an occasion.

One similar to this mini intensive care unit for young, sick, or injured birds is ideal.

For larger birds, you might need to invest in an infra-red heat lamp, equipped with a variable heat controller.

The lamp should be suspended over the bird’s isolation quarters, preferably so there is a temperature gradient across the cage, with one end being warmer than the other.

As the bird starts to recover, it will seek out the cooler area.

A reflector around the bulb helps to direct the rays of the lamp effectively, while an adjustable controller enables you to lower its heat output, and this is a necessary step in re-acclimatizing the bird.

One of the difficulties of avian medicine is that the symptoms are so remarkably similar for several illnesses, unraveling the cause can be difficult, which is a problem when treatment has to be started immediately.

In many cases, the illness is likely to be caused by a bacterial infection, which will respond well to antibiotic treatment.

These drugs are available only by veterinary prescription in some countries but are easily available elsewhere in pet stores.

Make sure to follow the instructions when using any antibiotic and never stop a course of treatment before the recommended period, because although the bird may appear to have recovered, its condition could easily deteriorate again.

How To Medicate Your Bird

Administering antibiotics via drinking water is the most common and easiest method, but is not always reliable, because you cannot be sure how much your sick bird is actually drinking, and it may not consume enough of the medication for the drug to be effective.

Avoid offering foods that contain a large percentage of water, such as fruit or greenstuff, so as to encourage the bird to drink the treated water.

Place the water alongside a perch if the bird is resting there, rather than on the floor so that it is within easy reach.

In some cases, especially with larger species, your veterinarian may prefer to give the bird an injection. This can speed its recovery quite dramatically, with the subsequent treatment given via the bird’s food or drinking water.

You may also be required to give your bird its medication via a syringe, and this can be tricky as in most cases you will need to hold its head securely and wait until the medication has been swallowed.

It is important not to rush the bird’s recovery, once its condition starts to improve.

It will almost certainly have lost weight, as reflected by the increased prominence of its breastbone.

Do not put the bird back in the aviary until such time as its condition has been restored to normal, or it could suffer a relapse.

Watch the weather as the bird will need to be re-acclimatized to room temperature and then life outdoors, especially if in winter.

Inflammation and swelling of the eyes can strike any bird, and although the signs are quite clear, it is important to remember that they can be indicative of either a localized or a more serious disorder, cush as chlamydiosis.

Much depends on the bird’s demeanor. If just one eye is affected, it is more likely to be the result of a scratch, particularly if the bird appears to be lively and alert and is eating normally.

If both eyes are affected and the bird becomes more depressed, the likelihood is that it is suffering from a more serious illness.

In cases where just the eyes are affected, treatment using special ophthalmic ointment or drops should be adequate to resolve the problem, but be prepared to apply the treatment about four times daily. It may be easier to apply drops rather than ointment, but you must ensure that the drops are not lost by the bird blinking at the wrong moment.

With ointment, smear it out of the tube along with the eye, and be sure that it reaches its target. Hold the bird for a few minutes afterward so that the ointment can dissolve in the tear fluid, or the bird may wipe it off on a convenient perch.

Recovery in most cases of this type is pretty rapid and the inflammation soon subsides, but don’t cease treatment prematurely.

If you have several birds in one aviary affected by eye ailments, try to identify the cause of the problem.

Maybe the perches are dirty and by rubbing their heads on the sides of the perches, the birds are getting the infection.

The problem could also be linked to the diet as a shortage of Vitamin A can trigger eye problems. Cataracts will develop on occasion in birds with red eyes, and will also occur in elderly parrots. Other eye problems are relatively rare in pet or aviary birds.

Bacterial illnesses can be controlled by means of antibiotics, but this group of drugs is ineffective agains viruses.

Most of the serious viral illnesses encountered in birds affect the plumage of parrots. French molt was first recorded in the huge breeding establishments set up in the late 1800s and can be devastating in its effects.

It afflicts young budgerigars at the age of four weeks or so and results in the loss of flight and tail feathers. Some birds are affected much more severely than others, to the extent that they cannot fly.

There is nothing that can be done by way of treatment.

Chicks suffering from French molt should be homed as pets, rather than being kept for breeding purposes. In a number of cases, they will regrow their missing feathers, but they may retain tell-tale signs, such as traces of dried blood in the feather shaft, close to the skin.

Good hygiene is important in preventing the spread of this illness.

Do not clean nest boxes with the same brush because this can transmit the virus. Wash everything out with disinfectant. The virus spreads easily through feather dust.

The other serious viral ailment encountered in aviculture is psittacine beak and feather disease. This was first recognized in cockatoos, but it has now spread to many types of parrots. Affected birds show loss of feathers, with the tissue of their bills becoming soft and overgrown. The claws to are affected in a similar way.

The depressive effect of this virus on the immune system means that the bird will succumb to other infections as its condition deteriorates over the course of several months.

Although there is no treatment available as yet, there is a diagnostic test that enables sufferers to be identified early.

The condition in its early stages can be confused with feather plucking.

Affected birds must be kept strictly on their own because they represent a serious threat to the health of the others, as the virus spreads easily through feather dust.

Here are some healthy bird treats that will help to prevent infections and keep your bird healthy. Better still is the fact that your birds will love them. Simply click on the picture to find out more about the treat.

Millet is one of those healthy bird treats that most birds can’t resist. If I put one in, my two cockatiels and two budgies make quick work of a sprig.

Please comment below if you have any favorite healthy bird treats that your birds rather enjoy!