Let’s look at a birds breathing system, because if your cockatiel or any bird is battling to breathe, there are normally reasons.

Why Is My Cockatiel Battling To Breathe?

The weather could play a big part. If you cockatiel is in a room that is too warm he may look as though he is ‘short breathing’ and if you leave him in the sun, this could prove deadly.

If you cockatiel gets a fright, he may also show breathing difficulties.

Other reasons could be related to respiratory infections, toxic exposure like kitchen fumes or teflon poisoning. An unfit and overweight cockatiel can also display signs of heavy breathing.

If your bird is really battling to breathe, there could also be an obstruction in his chest, like a tumour.

common causes of breathing difficulties in cockatiels are cause by respiratory infections, and you will need to take your bird to an Avian Vet as soon as possible. Symptoms include a runny nose and sneezing.

Here are some products that may also help you with your sick bird. These are affiliate links, which means that I may get a small commission if you decide to buy anything.

How Does A Birds Breathing System Work? 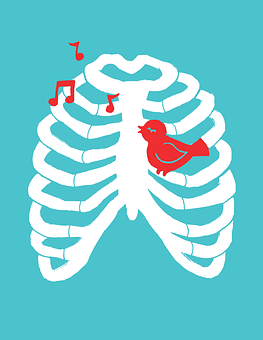 The respiratory system of all birds facilitates the efficient exchange of carbon dioxide and oxygen by using air sacs to maintain a continuous unidirectional airflow through the lungs.

A birds breathing system is very different to that of a mammal. It needs to exchange gas as efficiently as possible.

A birds breathing or respiratory system consists of paired lungs, which contain static structures with surfaces for gas exchange, and connected air sacs, which expand and contract causing air to move through the lungs, which are static.

A breath of oxygen-rich inhaled air remains in the respiratory system for two complete inhalation and exhalation cycles before it is fully spent (used) and exhaled out the body.

When fresh air is first inhaled through a bird’s nares (nostrils), it travels through the trachea (a large tube extending from the throat), which splits into left and right primary bronchi (a.k.a. mesobronchi, with each bronchus leading to a lung).

The inhaled air then travels down each primary bronchus before it divides.  Some of the air will enter the lungs where gas exchange occurs and the rest of the air will fill the posterior or rear air sacs.

During the next exhalation, the fresh air in the posterior sacs enters the lungs and this is where the gas exchange happens.

This pattern of airflow through the respiratory system creates a one-way flow of fresh air over the gas exchange surfaces in the lungs.

Furthermore, fresh air passes over the gas exchange surfaces during both inhalation and exhalation, resulting in a constant supply of fresh air enabling the bird to experience a near-continuous state of gas exchange within the lungs.

This is very different from mammalian lungs, which experience bidirectional airflow over the gas exchange surfaces.

The efficiency of the avian respiratory system is owed in part to its unidirectional nature and the structure of its parabronchial system (the smaller passages within the lungs). The air capillaries in the walls of the parabronchial system have a much larger overall surface area than that found in the mammalian respiratory system. The greater the surface area, the more oxygen and carbon dioxide can be passed between blood and tissues, which makes for more efficient breathing.

This information can be further delved into at AskNature.org.