Tumors on birds are luckily not a common problem in most birds, with the exception of budgerigars where tumors typically afflict about one in three birds.

What Are Tumors On Birds?

Tumors on birds are growths that spout somewhere on the bird’s body. They remind me of a Muscovy duck, as if you look at their faces it looks like tumors growing out of them, especially the males. 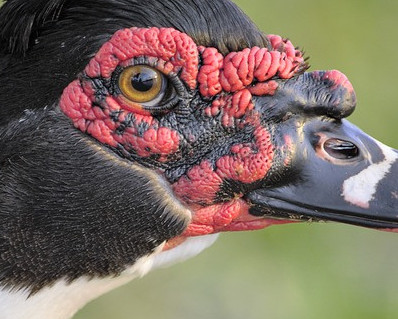 Tumors can be divided into two categories – benign (non-cancerous) and malignant.

Benign tumors are usually fairly superficial and pet budgies often suffer from fatty lumps of this type, known as lipomas. They normally appear on or near the breast bone.

These can be removed surgically while they are still relatively small, although unfortunately they often recure and as they become larger, interfere with the bird’s ability to fly properly.

Internal tumors of the body organs are harder to detect. Weight loss and a change in cere coloration, in the case of the budgerigar, are typical signs, with the reproductive organs and kidneys being common sites for the growth. There is usually little that can be done to get rid of these.

The cause of these tumors on birds is unclear, although it has been suggested that a virus could be implicated. Up to a third of budgerigars will develop a tumor at some stage in their lives, and although most strike middle-aged or elderly birds, such growths can develop in birds as young as 18 months and are a common cause of death.

One type of tumor which is known to be caused by a virus is a papilloma. This is a particular problem in the larger parrots, especially in macaws and Amazons. Papillomas, with their distinctive wart-like appearance, are most obvious when they occur around the eyes, but they can also develop within the cloaca, which lies inside the vent, in such cases the tumor may have been sexually transmitted.

The first obvious indication of this condition, which is known as cloacal papillomatosis, is the emergence of the papilloma through the vent or possibly unexplained blood loss on the floor of the parrot’s quarters.

Other symptoms may include constipation and blood-stained droppings, because of the delicate nature of cloacal papillomas which bleed readily.

The link between papillomas on the head and in the vent is a result of the fact that pairs of parrots engage in vent preening prior to mating so that the virus spreads between these parts of the body.

Surgery to cut out cloacal papillomas is not recommended because of the risk of severe blood loss, so a technique known as cryosurgery is often used. The bird is anesthetized and the tumor is frozen and killed with liquid nitrogen, ultimately sloughing off out of the vent.

Another approach that has proved successful is for an avian vet to make a vaccine, which is given to the parrot. The vaccine stimulates the bird’s immune system enough to kill the tumor.

Either way, tumors on birds are not pretty and can make your pet’s life very uncomfortable. I am glad that I have never encountered one on any of my birds.

How to Build an Aviary