Did you know that there are nine different species of Poicephalus Parrots, all of which are widely distributed across Africa?

The color of the birds is variable, and they range in length from 22 – 30cm. They are all quite stocky and short-tailed in appearance and they need to be housed in reasonably strong aviaries, constructed using 16 gauge mesh.

The wood needs to be protected from the bird’s bills, which can cause substantial damage.

Poicephalus parrots make attractive aviary occupants.  Adult birds will probably remain shy, but hand-reared chicks can develop into friendly companions and pets. They have a good lifespan. Senegals, for example, have been known to live for over 40 years.

As Poicephalus Parrots have quiet voices and are relatively small in size, they are popular pets for people who live in apartments. While there are nine species of Poicephalus parrots, only four are commonly kept as pets: the Senegal parrot, Meyer’s parrot, Jardine’s parrot, and the Brown-Headed parrot. 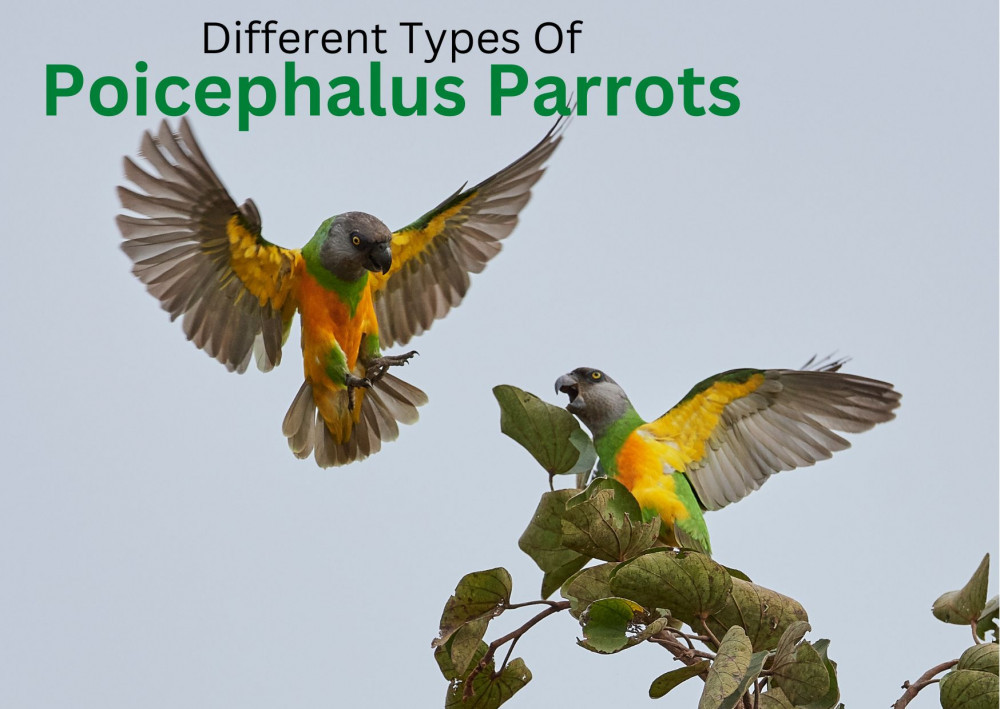 There are ten different types of Poicephalus Parrots and they all come from Africa. I have supplied information on the most common ones. The ones not mentioned in this article include the Cape Parrot, the Yellow Fronted Parrot, the Brown Necked Parrot, and the Niam-Niam Parrot.

Meyer’s parrots or P. meyeri are found over a wide area of Eastern and Southern Africa. They show a great variation in appearance, and even more than the Senegal Parrot. They are mostly brownish-grey on the head and wings, with bluish-green underparts. In some but not all cases, there will be a yellow area of plumage on the crown, while all of them display yellow at the bend of the wings, at the top of the legs, and on the under tail coverts.

They are mild-tempered and tend to bond with many people, not just one like the Senegal below.

It is often assumed that the slight differences in plumage provide a means of telling the cocks from the hens, but this is not the case with these parrots. Meyers Parrots cannot be sexed visually. 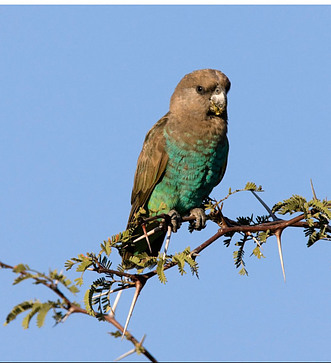 Fledgling Meyer’s parrots are mostly grey with no yellow markings and their irises are dark.

The Senegal or Poicephalus Senegalus is the most widely kept member of the Poicephalus group. They are affectionate and sociable and tend to bond with one person. Try to socialize them with many people so that they don’t become too protective and aggressive to others who approach their favorite person.

It halls from West Africa and has a greyish head and green breast and wings. The underparts vary in color from yellowish orange to red. Once again visual sexing is impossible.

Senegals are not noisy and their calls consist of a series of rasping whistles rather than the screeches that are so common with other parrots.

The hen often flares her tail in the vicinity of the nest box as the time for nesting approaches, and she spends time inside the box before actually laying.

It is essential to put the nesting box in a dark corner of the aviary, and preferably in the shelter, as most Poicephalus parrots are reluctant to nest out in the open. 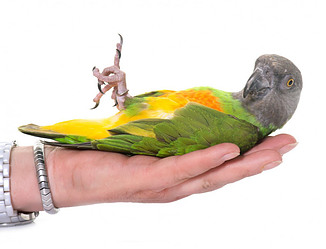 The hen lays 3 to 4 eggs and the incubation time is 28 days. The young then fledge when they are 63 days old.

Ruppell’s Parrot or P.rueppellii hails from South West Africa and is not widely kept. They are 23cm in length.

Visual sexing with these parrots is straightforward as the cock bird is less colorful than his mate, being silvery brown on the head and underparts, with a distinct shade of grey over the wings.

Yellow markings are evident at the highest point of the wings and on the thighs. The hens have a blue abdomen, upper back, and rump. 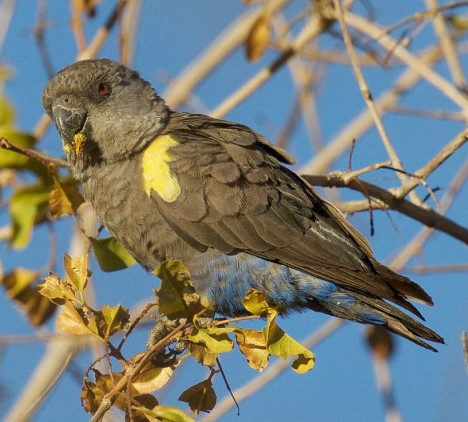 Ruppell’s prefer to nest during the northern hemisphere’s winter months when the likelihood of success is significantly reduced unless they are housed in indoor accommodation with extra heating and lighting available.

The incubation period is 28 days and they lay 3 to 4 eggs at a time. The fledging period is 68 days.

These are the most colorful and definitely the most attractive of the Poicephalus parrot family and they hail from East Africa. The Latin name for them is P. rufiventris.

Visual sexing is straightforward as the head and the wings of both sexes are brown, but the underparts of the hen are lime green and the underparts of the cock bird are brilliant orange. The cock also has green feathering on the legs. Young chicks can also be sexed as they start to feather up.

Red-bellied Parrots are 23cm in length. They lay 3 eggs at a time and the incubation period is 28 days. The chicks fledge after 84 days. 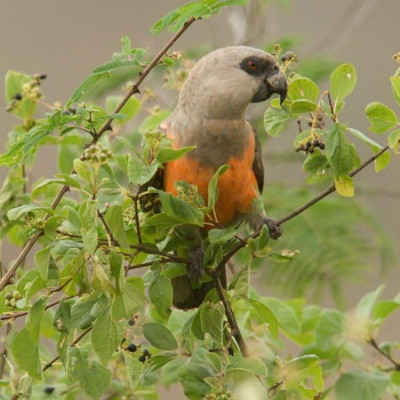 Feeding can present problems as some birds will only eat a mixture of sunflower seed and peanuts which are a particular favorite of this group of parrots. This leaves them vulnerable to Vitamin A deficiency, so a vitamin and mineral supplement is essential for these parrots.

Offering a selection of fruit and green stuff will also show you what your birds like. Pomegranates are also often a favorite.

As suggested the head of this parrot is brownish grey, but the general plumage color is green.

The underwing coverts are bright yellow and the rump is a very bright almost metallic green. On some parrots, there are some random yellow feathers on the head neck, and wings.

The tail has an olive-brown edge and green tip and the legs and feet are blackish-grey.

Brown Headed Parrots are playful, high-energy, and outgoing. They like attention, but don’t crave it as much as other parrots like the Senegal. They are independent and love to play and exercise. So provide them with plenty of toys.

The attractive Jardine’s Parrot or P. gulielmi is found in the forested areas of Central Africa.

These are the best talkers of the Poicephalus Parrot family. They also tend to be more aggressive and destructive than the other parrots in this family.

There are three types, varying mainly in the depth and extent of their orange plumage.

The Masai or P.g.massaicus), from Kenya and Tanzania has less orange-red plumage on its head and is a slightly paler shade of green than the most widely distributed Central African type (P. g. gulielmi) which extends as far south as Angola.

The northern type (P.g. fantiensis) from Ghana and the Ivory Coast, has paler orange markings than the others, and more prominent green edging to the feathers over the back. 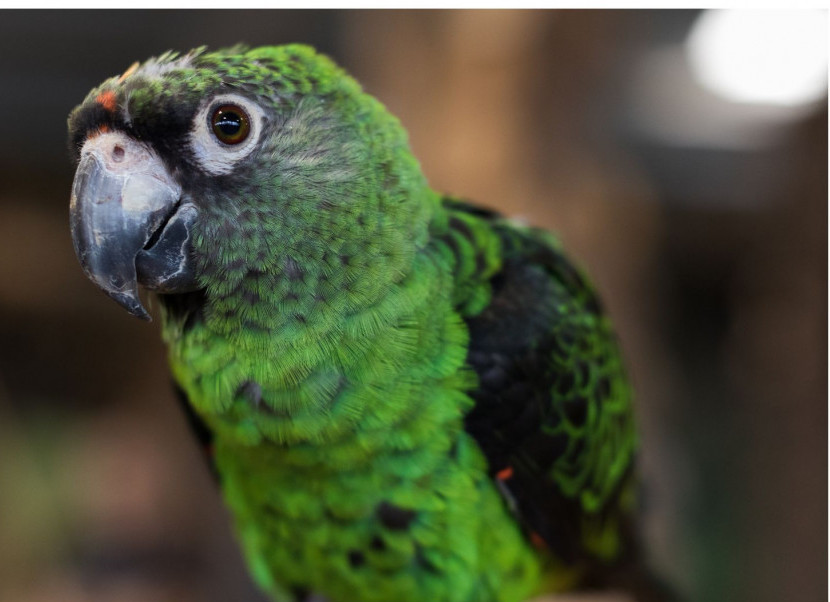 It is important not to pair these different types haphazardly in order to maintain the variations.

Jardine’s parrots are among the larger members of the Poicephalus group, averaging about 28cm in length

The cocks have reddish-brown eyes whereas the hens have brown eyes, but this is not a reliable means of distinguishing between the sexes. The skin around the eyes is especially pronounced.

The clutch size is 3-4 eggs and the incubation period is 27 days. the Fledging period is 80 days.

Hope you have enjoyed this article. Please feel free to share your experiences if you are lucky enough to own any parrots in the Poicephalus Family.