Both Grey Parrots and Eclectus Parrots are widely bred and both of them make popular pets, especially the African Grey. 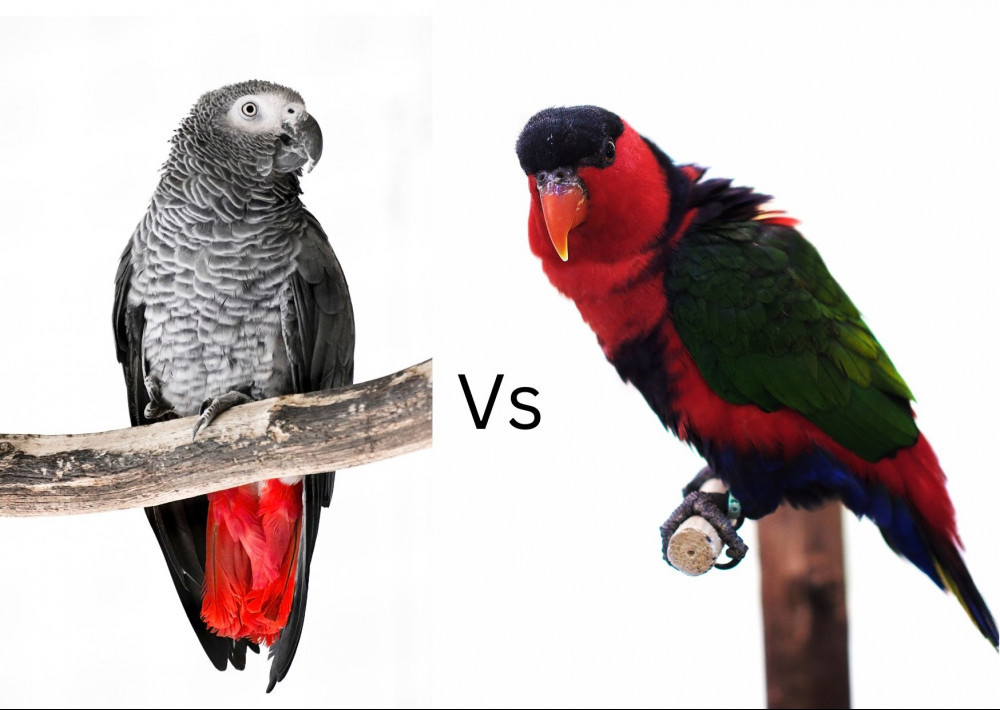 The Grey is very popular as a pet, but neither of them has close relatives within the parrot family.

They were both brought to Europe as early as the 1500s, althought it was only realized a lot later that the cock and hen Eclectus Parrot are in fact the same species of bird, as their appearance is so different.

The grey parrot extends right across Africa, living in the equatorial region south of the Sahara.

There are two recognizable forms, the timneh and the red-tailed.

The timneh is found only on the western side of the continent. It can be distinguished from the red-tailed by its smaller size, darker grey coloration, lighter colored upper bill and maroon tail feathers.

Young birds of either type can be identified by their dark irises, and mature birds have darker irises.

Sexing grey parrots visually is difficult, although in some cases cock birds may have recognizably darker coloring on their wings. 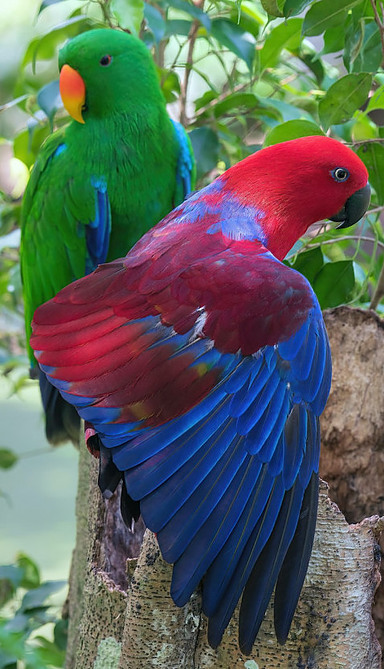 For breeding purposes DNA sexing is recommended, although simply having a true pair offers no guarantee of success if wanting to breed. Compatibility is an important consideration, and it is for this reason that a proven pair of grey parrots is likely to command a premium price compared with a sexed pair which have not bred together previously.

Should you find that after two years or so, a pair has shown no interest in breeding, it may be worthwhile swapping the maie out. Breeding success may then follow quite rapidly, with the hen already well-established in her quarters.

A standard quality parrot seed mix can be used as the basis for their diet, but a complete pelleted diet is always better.

Greys are prone to feather plucking, particularly in the home, and this may be linked to a poor diet coupled with lack of bathing facilities.

Daily spraying is necessary if the parrot is kept in the house.

Greys dislike cold damp weather and in an aviary it is vital they have suitable indoor accommodation when the weather is bad. Only well-acclimatized birds should be expected to be out in winter without heating.

Greys develop into excellent pets and are unrivaled mimics, but they do have a shy side to their natures.

It is very important to get a grey parrot soon after weaning if you are seeking a pet. They are shy birds, and it is very difficult to win the confidence of an untamed adult bird. 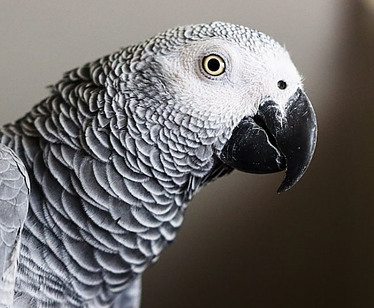 Greys nest through much of the year and are bred and hand-reared on a large scale, so there is usually a ready choice of chicks available worldwide.

Eclectus parrots do not have a fixed breeding season, but can breed through much of the year.

Hens lay two eggs in a clutch, with incubation and fledging details similar to those of the grey parrot. Pairs will often produce young of one sex only, although it is unclear why this is so.

It is vital that eclectus parrots have a good supply of green stuff such as spinach, chickweed and dandelion as part of their regular daily diet, along with vegetables such as corn on the cob and carrots. A vitamin and mineral supplement is advisable if the birds are eating seed rather than complete food.

The cock bird is predominantly green while the hen is mainly red. Young birds show these different colors as soon as they start to feather up in the nest.