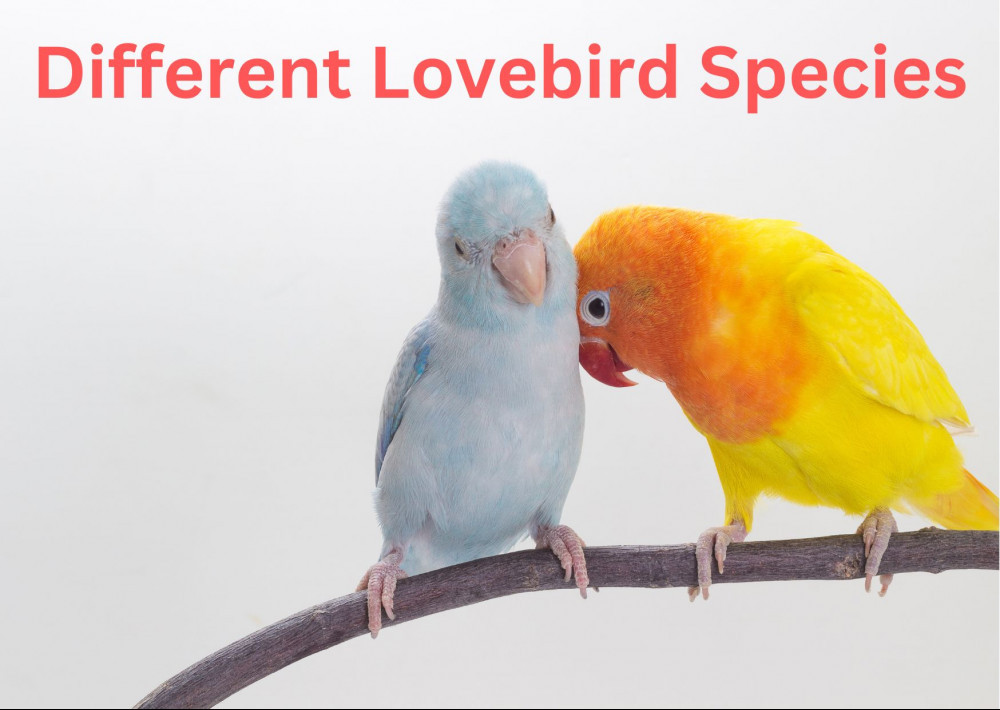 I have written an article before on lovebirds and how they fare as pets, but in this article, I would like to investigate different lovebird species, as there are many different types.

There are nine different species of these small attractive, short-tailed parrots from Africa and they are one of the most popular birds to keep across the world.

In most cases, it is not possible to sex the birds by sight and for many years breeders were forced to rely on the pelvic bone test to distinguish pairs.

This method, however, is only reliable during the breeding season when the space between the hen’s pelvic bones enlarges to allow for the passage of the eggs.

Keeping unsexed birds on a colony basis is fraught with danger because they may fight. Reliable scientific sexing methods have removed the guesswork from identifying pairs, and even though these tests can be costly compared with the price of the birds, they will at least ensure breeding success.

Lovebirds are generally hardy by nature, particularly when established in their quarters, but the peach-faced is especially susceptible to frostbite. These birds should not be encouraged to remain on perches in the open part of the flight when the temperatures are too low.  It is best to design the shelter so that the birds can be shut in when the weather is at its worst.

Lovebirds have an aggressive nature, so if they are housed in adjacent flights, the adjoining fencing must be double-wired so as to prevent the birds from biting their neighbors’ toes.

Feeding and caring for lovebirds is easy. They eat a diet of Budgerigar seed, groats, sunflower, and safflower seeds, augmented by greenstuff which must be given regularly.

Soft food may be eaten when there are chicks in the nest. Lovebirds’ bills are quite strong and they can whittle away branches so be prepared to replace perches quite often.

Young hand-reared lovebirds or those who have just become independent can develop into friendly pets and can be taught to talk and whistle quite successfully, although they are not as talented in this respect as budgerigars.

Their average lifespan is ten to fifteen years.

The incubation period with most lovebirds is 23 days. The fledging period is 42 days and the clutch size is anything from 3 to 5 eggs. 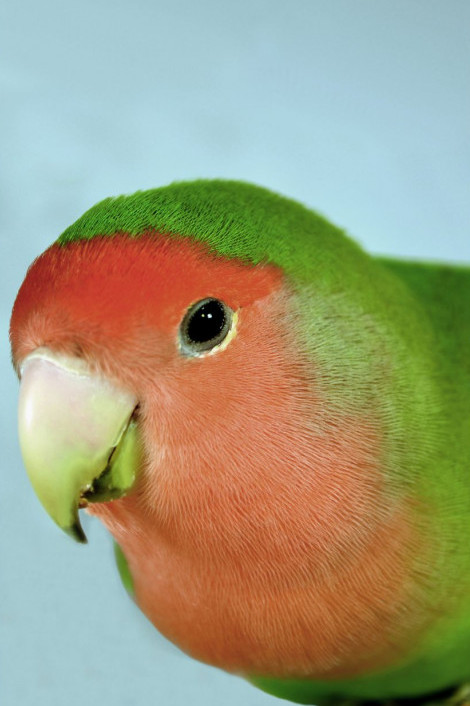 Agapornis Roseicollis or peach-faced lovebirds are probably the most widely kept of the different lovebird species.

As the name suggests, these parrots have salmon-pink facial plumage, which is offset against a green body and blue rump.

They are one of the larger lovebird species at about 15cm (6 inches) in length.

The first colour mutation in the peach-faced lovebird was reported in 1954 from Japan. It is a yellow variant which retains its pink face, and is known as the golden cherry.

More spectacular is the lutino, which is an American mutation from the 1970s.

It can be identified by its red eys and white rump.

Pied versions of the peach-faced lovebird occurred in the United States with a separate strain being developed in South Africa. These birds were originally green with variable areas of yellow feathering. Now the pied characteristic has been combined with the blue series of peach-faced birds.

The first blue variant appeared in 1963 and was of Dutch origin. Today this variant is most commonly known as the pastel blue.

These birds are not pure blue in color but retain a green hue to their plumage. Their facial color is a very attractive pale salmon pink.

The appearance of a dark factor mutation, matching the dark factor seen in the budgerigar, meant that both green and blue series lovebirds could be bred in light or dark tones.

The lighter variants are known as dark green or jade, and cobalt, whereas those with darker coloration are described as olive and mauve.

Among other peach-faced mutations which parallel those in the budgerigar are cinnamon and grey.

By combining the primary mutations, a much wider range of color varieties has been developed, including the buttermilk, which is a creamy pale yellow shade.

There have also been changes to the facial coloration in more recent times, thanks to the creation of the orange-faced mutation, although this is still quite rare.

Not surprisingly, with such a large number of colors, there is an increasing interest in exhibiting lovebirds. They are often exhibited in pairs and their appearance together can be stunning. A well-matched pair is certain to win over an individual if the birds are equal in other respects.

The masked lovebird (a.personata) has several color variants, although not as many as the peach-faced lovebirds. 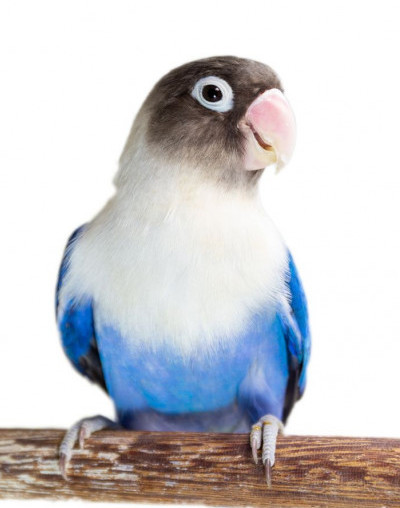 The blue is its best-known form, in which the usual yellow areas are replaced by white, and the green by blue. There is also a dilute form of the masked, sometimes rather misleadingly, called the yellow, in which the color is paler than normal.

When combined with the blue mutation, this gives rise to the so-called white, in which the blue plumage is paler and the black area on the head is much paler than normal.

The masked lovebird is a member of the white eye-ring group of lovebirds, as they have a prominent bare area of skin around the eyes. The group is also linked by its nesting behavior.

Nesting materials are carried to the site in the bills, rather than tucked between the feathers like the peach-faced lovebirds.

The abyssinian lovebird (a. taranta) originates further north than members of the shite eye-ring group and unlike them and the peach-faced, it can be sexed easily. Cock birds have a broad area of red plumage extending back up the face from the bill over the eyes.

Abyssinians do not construct an elaborate lining in their nest box. The hen will lay on a soft pad of feathers that may have been plucked from her own upper breast.

This particular species is also known as the black-winged lovebird, thanks to the color of its black flight feathers and the underwing coverts.

The widely kept Fischer’s lovebird (a. fischeri) is one of the white eye-ring group and orginates from Tanzania.

If you see a Peach-Faced Lovebird next to a Fischer’s Lovebird, it might be challenging to tell the difference between them.

However, if you look hard enough, a Fischer’s Lovebird is more multi-colored around its head.

Fischer’s construct an untidy and often domed nest in the nest box.

Color mutations also exist here but are less common than in the masked varieties.

A flue form was bred in South Africa but was not established.

Today’s Blue Fischer’s are descended from a bloodline developed in California in 1979, while in Australia a black-eyed yellow variant has also emerged.

Fischer’s Lovebirds have plenty of energy, making them extremely lively and perfect to be around a large family that wants to show affection and have fun. However, they are gentler than the other lovebird varieties, making them great to be around children.

This different lovebird species is a lovebird with a green body, yellow neck, and a dark face.

Their beak is usually a shade of red, but their yellow collar is their most dominating feature, thus why they’re named the way they are.

They’re native to Northeast Tanzania and have been introduced to Burundi and Kenya.

Yellow-Collared Lovebirds can live a little longer than the previous lovebirds on this list by having an expected lifespan of 10 to 20 years.

These types of lovebirds are vivacious and energetic. They need lots of attention and playtime.

They’re native to Madagascar, making them a challenge to find out in the wild.

They are the smallest species of lovebirds, being just under 5 inches in length while weighing around an ounce.

Last but not least on this list of different lovebird species is the Black-collared Lovebird. This one is a small light green lovebird that’s native to equatorial Africa.

This is by no means the entire collection of different lovebird species, just the most common ones. 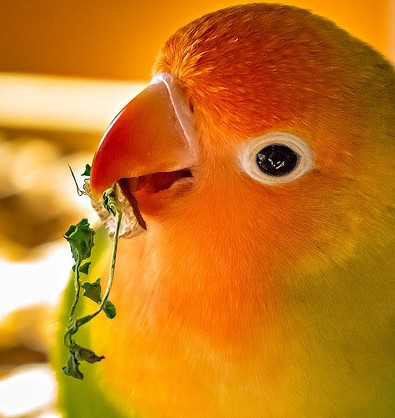