Unfortunately, there is always a possibility that common bird injuries will arise, both within the confines of the home and in the cage or aviary. You need to learn how to take adequate precautions to minimize the risks of bird injuries.

You also need to be aware of what to do and who to contact when an injury does occur. The outcome may otherwise prove fatal or could leave the bird permanently handicapped.

One of the most common injuries occurs when a bird flies into an obstruction, such as a pane of glass in the home, or even the mesh of the aviary flight.

This is especially common in the case of young Australian parakeets, which are especially nervous when they first leave the nest.

With this type of injury, the affected bird is likely to end up stunned and disorientated on the floor. There may be no immediate sign of an injury on the bird’s body, but if you look closely at the area of the cere, above the bill you may notice a slight sign of impact there.

It is impossible to treat this condition, but if transferred to quiet darkened surroundings, the bird should recover uneventfully on its own.

Occasionally however the skull may have been fractured and there could be an underlying brain hemorrhage. In almost all cases this will prove fatal.

Where birds are being housed in adjoining flights it is vital that both sides of the panel separating them are clad with mesh, as this should create a barrier that prevents neighboring pairs from coming into contact with each other.

Even so, you should check the panel at regular intervals because the mesh can sag, allowing the birds direct contact. This in turn can lead to badly bitten toes. If necessary, you can slide wooden spacers in between the mesh to keep the panel sheets apart.

The treatment of fighting injuries in birds depends greatly on their severity. 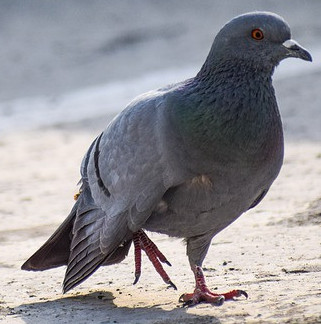 Stemming blood flow has to be the first priority, after which the bird should be left in a quiet and darkened area to recover from the shock. I normally use cornflour to stem the blood flow. This works especially well on the feet of the bird.

An electrolyte solution can also be helpful in such cases.

Fighting between neighboring birds can also result in bill injuries. This may have serious consequences for the bird’s appearance and it emphasizes the need to check the double wiring in the flight at regular intervals.

Bill injuries can also arise as a result of displays of aggression between birds sharing an aviary – notably cockatoos, where cocks can launch into sudden, vicious attacks on their would-be mates on occasions.

With an injury of this type, handling must again be kept to a minimum because it may exacerbate the effects of shock. You may need to do no more than stem the blood flow by pressing on the damaged part of the bill, particularly the central area in the case of the upper beak.

The advice of a specialist avian vet should be sought to ascertain the best way of treating the injury in the long term.

Initially, a diet of soft food is likely to be needed so that the bird can continue feeding, as the bird is unlikely to be able to crack seeds.

So long as the bird can be kept alive through this critical early phase after injury, and depending on how badly the bill has been damaged, it is possible that the tissue will regrow in time. This is usually a slow process and the bill is unlikely to reach its full length again. Even so, the regrowth should be adequate to allow the bird to eat hard foods again in due course.

In some cases, it may be possible for a false bill to be fitted.

Fractures of the limbs are quite unusual in aviary birds but should be suspected in cases where a bird suddenly appears to have difficulty in perching or flying. Treatment may involve immobilizing the injured area. The degree of function which returns after treatment depends in part on the site of the fracture.

An X-ray assessment will usually give the best insight into the extent of the damage.

In cases where fighting has occurred and the bird has suffered a loss of feathers and skin trauma, healing should occur naturally without too many problems. Birds rarely develop abscesses, unlike mammals, although bruising, which causes the skin to turn a deep shade of purple is often associated with this type of injury.

Bruising will usually fade after a few days. Lost feathers will be replaced almost immediately, emerging as spikes at first before unfurling.

Provided that the injury is superficial, healing should leave no lasting damage. Even so, do not reintroduce the bird to its mate as soon as it appears to have recovered because it is likely to be attacked again. Instead, introduce the pair on neutral territory. In the case of parrots, once one bird has turned on its partner, do not reintroduce them, as fighting can occur again and this time the outcome could be fatal.

With other birds, such as pigeons and doves, it may be possible to reintroduce pairs successfully before the end of the breeding season, but make changes to the aviary decor first.

Providing more cover will help because it could be that the hen did not feel sufficiently secure in her quarters to start nesting. This will also give the hen more protection from her mate.

I trust this article on common bird injuries will help you further your knowledge, especially if you own a bird.