Lories and Lorikeets are colorful parrots that originate from islands off the coast of Indonesia, New Guinea, Australia and the Pacific Islands.

They belong to a tribe called Lorini and they can vary in size from average to tiny.

They are parrots that dwell in trees and are peculiar on account of their tongues tipped like a brush that helps them in sucking nectar from different kinds of soft texture fruits like berries and flowers.

Many of them display areas of bright red in their plumage and their striking colors are part of the appeal of this group of parrots, not to mention their friendly personalities.

Lories and Lorikeets differ from other parrots in their feeding habits. They rely heavily on flowers for the nectar and pollen, which is the mainstay of their diet, although they will also eat fruit and roughage.

In the past bird keepers were forced to rely on their own recipes which were not always nutritionally balanced, but today there are excellent commercial brands available in powdered form to be mixed with water.

It is important however to read the instructions carefully and to replace the nectar each day before it sours. It is important to clean out the drink bowl thoroughly using a bottle brush and washing up liquid to remove any trace of old residues.

Never provide nectar in open containers because the birds will try to bathe in them. It is best to provide a separate container of water for bathing.

Dry diets are also available, which can be offered separately or sprinkled over fruit. Few breeders use them exclusively in place of a nectar solution, although they do add variety to the diet when used in moderation.

These parrots normally survive for about 20 years.

This post contains affiliate links, which means that if you decide to purchase anything on this page, I will get a small commission. This helps me to keep this website going. 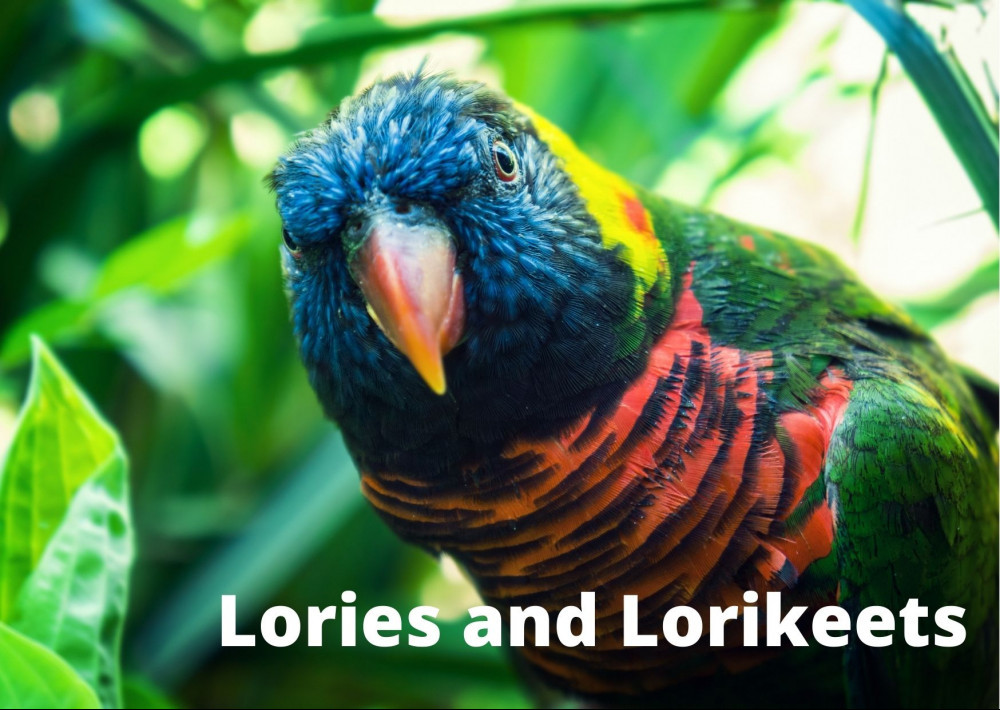 Lories and Lorikeets are lively and curious, and they are usually willing to sample anything when it comes to food with very little hesitation. This means that you can take advantage of fruits in season. Offer small amounts only especially when eating the fruit for the first time. They tend to be sociable, vigorous, extroverts, comedians and are fond of hanging headlong down. They are generally hostile toward other kinds of birds, but will bond readily with the entire family. They don’t form bonds with only one person as most other parrots do.

The liquid droppings of this group of birds means that they are not as popular as pets as the other parrots as they are a bit messy, but they do make very lively companions and can master a few words. It is important that their accommodation is easy to clean s they seem to get liquid food everywhere.

Visual sexing of these parrots is impossible.

Here are some different types of Lories and Lorikeets and there are quite a few of them.

Different Types Of Lories And Lorikeets

The green-naped lorikeet is one of the most widely distributed lorikeets and there are more than 20 different forms across its wide range.

They have dark green wings, a colorful breast, bluish head and a contrasting green area on the sides of the head is typical.

Pairs will usually nest quite readily and it is a good idea to line the nesting box with a thick layer of wood shavings in view of the liquid nature of their diet.

The incubation period is 27 days and the chicks fledge at around eight weeks.

Feather-plucking of the chicks can be a problem with some pairs and the problem is normally only resolved when the chicks leave the nest.

Green-Naped Lorikeets will live happily enough in a colony in a large aviary, but they can be very noisy. If you want to breed with them make sure to provide a choice of nesting boxes. They normally lay 2 eggs at a time. 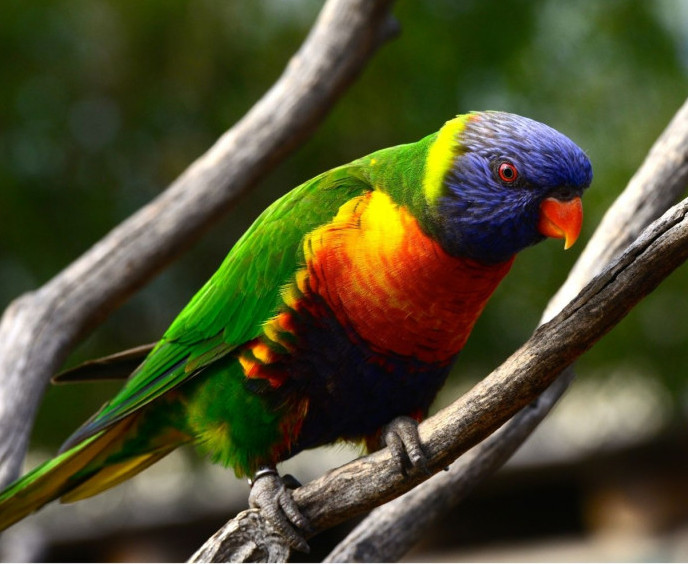 This species of birds is very popular among the pet lovers. Its body is a combination of various colors like brown, red, blue, green and yellow. It has a height of 26 cm and a weight of  between 100 and 157 g.

The Musschenbroek is from New Guinea and needs more seed in its diet than its nectar feeding family. They are prone to tapeworms so should be checked from time to time. Cock birds can be distinguished from the hens by the more extensive brown feathering on the head.

These birds are 23 cm long, have an incubation period of 26 days. They fledge at 65 days and the clutch size is normally 2 eggs.

This one originates from New Guinea and is 17.5 cm long. They tend to be quieter than the other lorikeets and are usually hardy birds. Sexing is done on the basis of the head coloration. The hens lay 2 eggs which hatch after about 24 days and the young fledge around two months of age.

Goldie’s Lorikeet is a very attractive species and their calls are not very loud.

These birds have a bright green colored back and orange bill. They grow to about 18 cm weigh from 23 to 34 g.

This lory with striking red plumage is from the Moluccan Islands of Indonesia. The Yellow-Baked chattering Lory is recognizable by the area of yellow plumage across the top of his wings. These are noisy birds.

Pairs breed reliably over many years and the hen incubates the two eggs for about 26 days. The chicks fledge by 11 weeks. 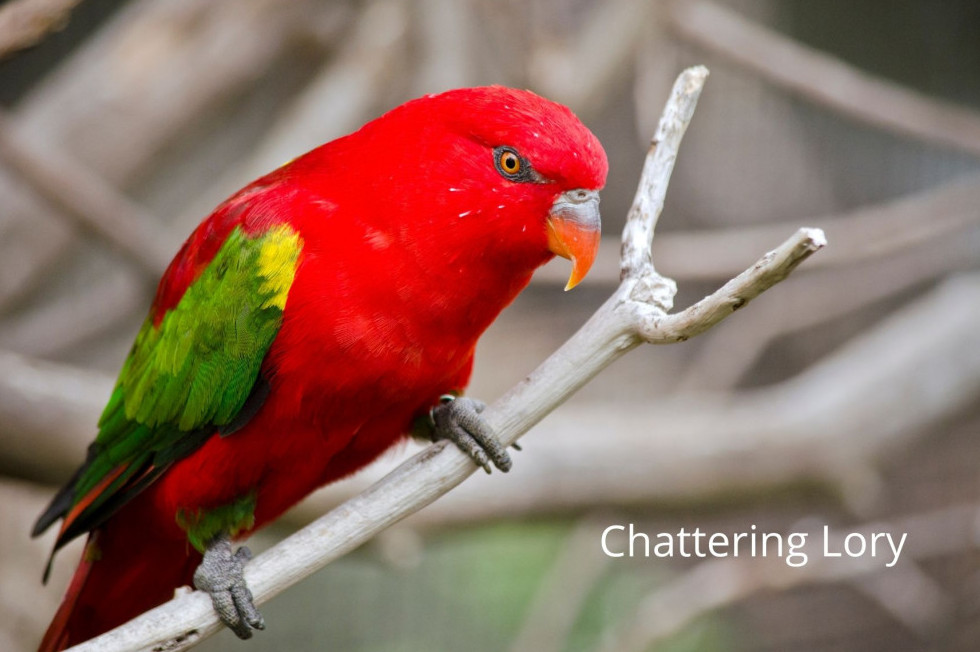 Another lory with predominantly red plumage is the Cardinal Lory which originates from the Solomon Islands. Its color matches a Cardinal’s robes hence the name.

These Lories are 30 cm in length and incubate for 24 days. They fledge after 70 days and the clutch size is normally two eggs.

The calls of these birds are loud. Visual sexing, as is the case with many lories and lorikeets is impossible.

The black-winged lory is a member of the Eos group of lories which are well represented in aviculture. The red plumage is broken by areas of black or dark blue.

They are 28 cm long and they incubate their eggs for 24 days. They normally lay two eggs and the fledgling period is 77 days.

These lories tend to have a musky odor which is normal, especially if housed indoors.

The main difference between Lories and Lorikeets is the shape and size of the tail feathers.

Lorikeets tails are longer and more tapering than Lories tails.

Stella’s Lorikeet originates from the highlands of central New Guinea. They have two distinct colour phases. In the black phase, the red feathering is largely replaced by black and in the red phase, the hen has yellowish markings in the vicinity of the rump. The red areas which are retained in the black form cock allow the sexes to be distinguished.

The bills of these birds are bright red, and pale coloration is usually a sign of liver failure or some other chronic illness.

The length of these parrots is 38 cm and they incubate their clutch of 2 eggs for 26 days. The chicks will normally fledge after 56 days.

The Dusky Lory originates from New Guinea and has distinct color phases. The markings of these birds vary from fiery shades or orange to a dull yellow.

The pairs can be sexed by the colour of the feathers on the rump. The cock birds are normally more yellow than the hens.

The distinction between lorikeets and parakeets is a little blurred in the case of the Swift Parakeet. The Swift’s tongue is not as well adapted as the lorikeets’ with the tiny papillae that can be raised to act as brushes to collect pollen. Seed should feature in this parakeet’s diet, as well as greens, fruit and meal worms. It shares characteristics with both lorikeets and parakeets. It hails from the Australian island of Tasmania.

Visual sexing is difficult, but the hens are generally duller than the cock birds. The young birds are less colorful than adults with darker irises. There is also a yellow mutation in this species but it is still quite rare.