Let’s look at a cockatiels mating ritual so that we can understand the whole breeding process a bit better.

In more mature cockatiels the song becomes extended and sounds like a bunch of twitterings and warblings. Hens cannot make these calls. (They also don’t talk).

The males usually fly up and down in the aviary making this rather irritating high-pitched call with a persistence that is quite remarkable.

They can also be perched when making their call, especially if in a smaller cage, and when doing so the wings are pulled away from the body thus giving the bird a sort of kite-shaped outline.

At this time his crest is normally lowered while his head twists from side to side while he faces his hen. 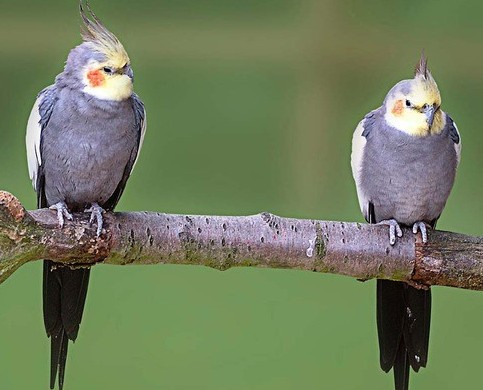 The hen will seem quite undisturbed most of the time by his antics as well as the other males in the cage.

This pose can also be done when cockatiels are soliciting a preen from one another.

To continue the cockatiels mating ritual, once the hen is on the ground the male will fussily follow it like a courting pigeon. Every now and again he will give a little jump as he carries on with his calls. He is quite comical to watch.

The hen will eventually solicit mating by lowering herself onto the perch or ground with her wings slightly away from her body and she also flattens her back. She holds her crest down and keeps her head twisted to the one side.

She does this as the male approaches during one of his courting songs and he will merrily carry on singing as he steps directly onto her back.  He will normally advance and retreat a couple of times before doing this.

The actual pairing takes some time and while the male continues to sing as he mounts, he soon becomes quiet.

The female will then take over by giving a continual squeaking sound. (see the video below)

If there is a nesting box in the cage, then you will see that most mating takes place shortly after the hen comes out of the box and this will happen several times a day during the breeding season.

Usually, once the nest box is hung, the male begins to take a very great interest in it as may his hen, but to a lesser degree.

He will hover about in its vicinity and look into the entrance hole. It almost looks as though he is courting the box at times as he will sing and chortle with his wings flattened and his head lowered.

When he gains enough courage to enter he will normally carry on singing once inside and may tap the box with his beak. Judging by his attitude, it is obvious that he is trying to attract the attention of his hen to the box.

The female will always approach with more caution, so he has to do all the investigations of the box before she will enter.

Both of them will spend many days coming and going from the nesting box. Before the hen lays any eggs, she will have spent quite a bit of time in the box either chewing the inside of the wood or brooding at the eventual nesting site. The male in the meantime will chew around the entrance hole, and thus enlargen it slightly.

One thing that I find really strange is that the cockatiels enter the box by going in tail first. And no matter how tame they are around humans, they always seem very cautious about being seen as they come out of the box. If you alarm them as they are coming out, they sink back into the darkness of the box again.

Here is an interesting video of a cockatiels mating ritual. Enjoy!