In this article, I am going to focus on Cockatiel Health Problems and how to deal with them.

Although cockatiels are generally healthy birds, they can still get sick and succumb to health problems from time to time. Most of these illnesses can be avoided by feeding your cockatiel a healthy diet rich in essential nutrients.

Signs Of Cockatiel Health Problems To Watch Out For:

Because cockatiels are so clever at hiding it when they are ill, here are some telltale signs to watch out for.

These could be serious and you may need to consult your vet.

Here are a few of the main illnesses that cockatiels are infected with from time to time.

Giardia is caused by a protozoan called Giardia Psittaci.

Signs of Giardia include weight loss, loose droppings, plucking of the feathers (mostly under the wings), depression and loss of appetite.

Giardia is a difficult infection for a vet to diagnose and it is spread through contaminated food and water.

If Giardia is left untreated, it can lead to other symptoms such as weak jaw muscles, slow eye blinks, poor digestion and overall decreased fertility.

To treat this condition, antiprotozoal therapy and supplemental vitamin E/Selenium are used.

Conjunctivitis is seen more in the Lutino cockatiels than in the greys.

The eyelids of your cockatiel will look swollen, and there will be a discharge from the eyes.

This condition is treated with topical ointments but is usually recurring.

This is usually a genetic thing, so avoid breeding with cockatiels that get conjunctivitis. 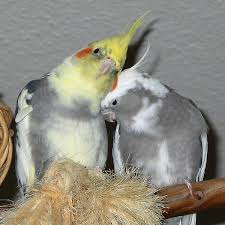 Candida is caused by the yeast Candida Albicans.

Young cockatiels are particularly susceptible to this, especially when the diet is low in vitamin A.

Symptoms of candida are usually white growths in the mouth and throat.

Your cockatiel will show signs of regurgitation, vomiting, and loss of appetite. Often candida can go unnoticed, and also can be spread in an aviary.

To avoid this, it is best to make sure the cockatiels diet provides adequate amounts of vitamin A. An avian vet will prescribe antifungal drugs to clear candida infections.

Roundworms are normally contracted from sand or dirt.

They are two to five inches long and look like spaghetti.

Sarcocystis is a parasitic disease and is normally found in countries such as North America where there is a large opossum population.

Sarcocystis is more prevalent in the winter months, and male cockatiels seem more susceptible to this condition than female birds.

There are usually no symptoms, as the cockatiel will appear healthy one minute and dead the next.

The best thing to do is to prevent opossums from entering your aviaries. Cockroaches can also carry this disease, by eating opossum feces, and then getting eaten by a cockatiel.

Papillomas are benign growths that can occur anywhere on a cockatiel’s skin.

These are not normally a problem, but if they get picked at by your cockatiel, it is perhaps best to have your vet remove them.

Aspergillosis comes from a fungus that can be found in compost piles or other areas where bird waste has collected.

With your pet cockatiels, there is little chance of getting Aspergillosis as long as you keep the cage clean, but if you have larger birds or if you have many birds on your property, there is a chance that you could see an outbreak of Aspergillosis if you aren’t careful with cleanliness.