Cockatiel chicks are the ugliest and cutest little beings you will ever see, and it is amazing that in a few short weeks a funny little cockatiel chick can grow into such a handsome bird.

As I have already mentioned in a previous post, the normal incubation time for the eggs is about nineteen days, but cold weather and indifferent incubation can lengthen the hatching time to a few days more than this.

The cockatiel chicks normally hatch in the sequence in which the eggs were laid, which is roughly at two-day intervals.

All About Cockatiel Chicks 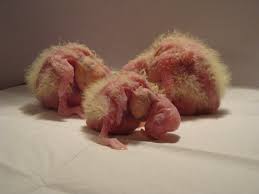 When the cockatiel chicks hatch they are normally helpless. They have huge heads on frail bodies and they battle to raise their heads in the air.

Here is an awesome video which shows a cockatiel coming into the world.

The beak of the cockatiel chick is soft to the touch and is tipped with the hard white egg-tooth that it has used to cut its way through the shell and into this world.

The eyes are sealed shut and it looks almost like an embryo. The dark eyes of the cockatiel chick can be seen through the skin of the eyelids, and lutino chicks have pink eyes under the skin.

Long wisps of yellow down clothe its body and there is a bit on top of its head.

To feed the chick, the adult cockatiel gently takes the bill of the calling chick into her own and gives it a slight pinch. The chick will bob its head vigorously and the parent will push regurgitated food into the sides of the chick’s beak with its tongue.

The food that is exchanged is partly digested seed and a sticky slightly milky fluid accompanies it.

Although the cockatiel parents don’t have the necessary glandular structure within the crop with which to secrete ‘crop milk’ like pigeons do, it is obvious that some proteinaceous substances must be included with the food they regurgitate because the rapid growth of the chicks would not happen on seed alone. In the beginning, cockatiel chicks are fed several times an hour. 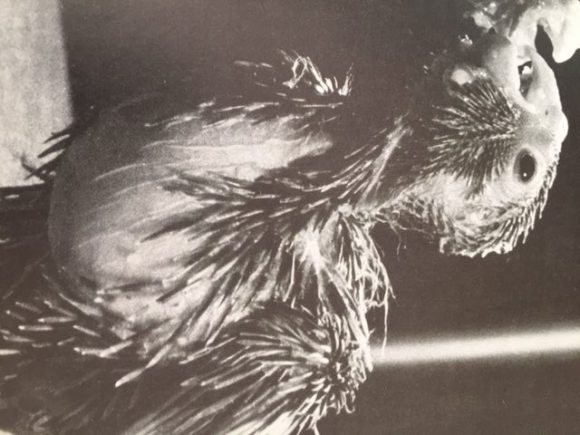 If you had to take one of the cockatiel chicks and examine it under a strong light, the crop wall and the skin are translucent and a mass of seed grit and surprisingly little fluid will be seen.

When there are still unhatched eggs in the nest, the lone cockatiel chick will lie so that its huge head is propped up by a shell. When all the eggs are hatched, the chicks lie so that the head of each is supported by laying on the neck of the next chick.

For a few days after hatching, the cockatiel chicks have translucent skin and almost all the internal organs can be made out. the most noticeable feature at this stage is the gizzard, as it gives a huge bulge to the belly.

The function of the gizzard is to grind the softened food into smaller particles using as teeth small pieces of gravel and grit inside. Once the parents have chicks they tend to collect more grit and gravel than ever before.

The next feature that stands out on the cockatiel chick is the huge crop. Its size almost seems to exceed that of the body. Sometimes bubbles of air get swallowed by the chicks and are visible inside the crop. If the crop does become too extended with air, try gently squeezing the crop between your fingers and push in a slightly upward direction, and the air will escape through the chicks mouth.

A new cockatiel chick cannot maintain its body temperature, and if it is not brooded continuously, its temperature will fall. it will become increasingly stupefied and can eventually die. If the parents are allowing the chicks to get chilled it is perhaps better to take them away and hand rear them or foster them off with other cockatiel parents.

Once the feathers start to pin, the cockatiel chicks will finally be able to control their body temperature. But remember that pin feathers do not retain the heat very well and at about this time parents leave their chicks for longer to go foraging for food. You will need to watch that the chicks don’t freeze, especially if it is winter. 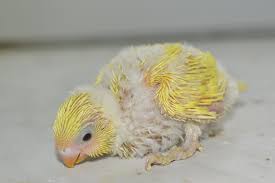 At this age when they are threatened or disturbed, they raise their tiny quills and rock from side to side, hissing. The voice acquires a different and harsher tone too.

Because of its rapid growth, the chick can be half of its final weight at one week of age. Sometimes the youngest chick will be born and caught under all the bodies of its brothers and sisters. The tiny cheeps that it makes are designed to be alluring to its parents and they will search out the beak of any crying chick from all the little bodies on top.

At about ten days the parents will start to leave the chicks unattended for some part of the day and this is the time that most breeders will put rings around their feet. Once they are thirteen days or older the banding will become almost impossible to do, as it won’t slip over the shank of the leg. Read this post on the ringing of birds.

The nest will tend to get dirtier and dirtier as the chicks grow, as the parents don’t practice sanitation.

At about three weeks the chicks begin to climb up to the nest entrance to view the outside world and also beg for food.

Any time between 28 and 35 days they will have flown the nest, but the occasional chick may wait a while longer. If they take six weeks, however, then there is something wrong with the feeding of the chicks.

Once cockatiel chicks leave the nest, they may return randomly and roost in it for about a week. Around this time the hen will start to lay her next clutch of eggs in the same box. If you can, try and clean out the box before this happens, otherwise, the new clutch of eggs become somewhat soiled.

If the egg laying starts too soon before the chicks leave, they can get badly chewed by both parents. If this happens it is normally the male cockatiel and not the hen who wants to start the nesting cycle again.