In this post let’s look at feeding baby cockatiels, as well as how to go about looking after them. It is a lot of work for the first few weeks, but the results you get if you are looking for a cockatiel as a pet are remarkable, as the cockatiels are tame and unafraid of humans by the end of the process.

Hand rearing baby cockatiels is no easy task, but there are times when you will need to rear neglected chicks to ensure their survival, or simply to fetch a higher price when you sell them at a later stage. Hand reared cockatiels will sell for a higher price, as they are already tamed.

Let’s Look At The Basics Of Feeding Baby Cockatiels

If you notice that one of the chicks seems to be falling behind its nestmates, you can provide it with supplementary food in order to ensure its survival.

Feeding times if you are hand-feeding the birds are stipulated further down on this post.

Reduce the time that the chick is away from the nesting box by preparing the food before removing the chick. 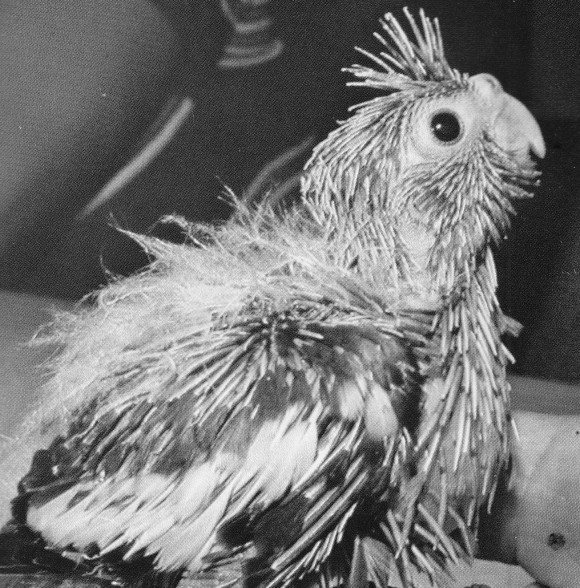 Offer the food to the chick on a teaspoon that has the edges bent inwards to form a sort of funnel. A spoon is better to use than a syringe, as it will allow the chick to eat at its own pace. With a syringe, you may force too much food into the chicks mouth and cause it to choke. After the feeding, always wipe the chicks beak carefully to remove any deposits of food. If the food is allowed to adhere to the soft developing beak, it could cause permanent distortion in later life.

Checking the bird’s crop at the base of the neck will tell you whether the chick has eaten or not. If the crop is slack, the chick is hungry, and if it is whiter in color than the surrounding skin, then it is full. Feed the chick until the crop appears quite full, but mustn’t look as though it is going to burst.

If you are hand-rearing the cockatiel away from its nest, you will need to keep it warm in a brooder. For new chicks, the temperature should be at 37 degrees centigrade. Gradually reduce this to 27 degrees centigrade as the chicks get closer to two weeks old.

Let’s look at how to handle and at feeding baby cockatiels for the first four weeks.

Day One Through To Week One

Cockatiel babies are very delicate after hatching and should be left with their parents if at all possible.

Sometimes you may have to intervene if the parents are not interested or not doing a good job.

The first two feedings should be a mixture of Pedialyte and probiotics.

Heat the food with hot water, not in the microwave or you could risk burning the little bird’s crop.

The second week of their lives, cockatiel chicks need to be fed every four hours.

The babies can go approximately eight hours overnight without being fed, which does make life a little easier for you.

Now they should be begging loudly for food, making it easy to overfeed them.

Four to six MLS should be enough to fill the crop at this age.

There is going to be significant growth and change during this week and the chicks can be fed every five hours with the amount of up to 10 MLS per feeding.

The chicks must never go for more than eight hours without being fed, so adjust the schedule accordingly at night.

Roughly around the fourth week of life, cockatiels will begin to take interest in millet spray and seeds.

Much of what they attempt to eat is wasted, as they perfect the art of cracking open their seeds.

Feeding them by hand can be reduced to three times a day by the end of this week and they should eat more or less 15 MLS at each feeding.

It is best to let cockatiels self-wean, and continue one to two feedings a day until they are clearly eating on their own and not reliant on the formula.

Typically, when the cockatiel takes just a few full beaks worth of formula and loses interest it is safe to wean.

Make sure to offer a variety of bird-safe vegetables and fruit, a quality cockatiel pelleted feed or seed mixture, and millet spray, as the young cockatiel will be very active and need a balanced diet to fill out and reach maturity.

If you have never hand fed baby cockatiels before, seek the assistance of an experienced breeder or avian veterinarian.

Most times it is best to leave the chicks with their parents if possible until about three weeks old, and then the babies will be easier to handle.

Although hand-rearing cockatiels can be rewarding, it is also hard work, so make sure that you are able to dedicate yourself to the task at hand before you take on the responsibility.