Did you know that the cockatiel and the cockatoo belong to the same bird family, as different as they both look? The distinctive thing about the cockatoo family is that they all have crests on top of their heads. Let’s look at cockatiel vs cockatoo.

The cockatiel bird was originally described by Scottish writer and naturalist Robert Kerr in 1793 as a miniature cockatoo (Nymphicus hollandicus). It was previously considered a crested parrot or small cockatoo, however, more recent molecular studies have assigned the cockatiel to its own subfamily called Nymphicinae (Wagler in 1832). Now it is classified as the smallest of the Cacatuidae (cockatoo family). 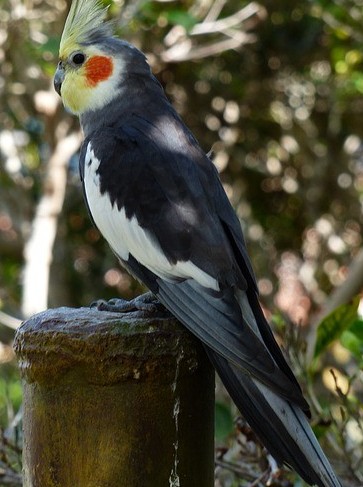 All these birds are all native to Australia and favour the Australian wetlands and bushlands.

The cockatiel is a bird that is a member of its own part of the cockatoo family endemic to Australia.

If you look at the cockatiel vs cockatoo, they are both prized as household pets and companion parrots worldwide. Cockatiels are the more popular choice, probably due to size and cost.

They are easy to breed with, and as a caged bird, a cockatiel is second in popularity only to the budgerigar.

The cockatiel is now officially and biologically classified as a genuine member of the Cacatuidae on account of sharing all of the cockatoo family’s biological features, namely, the erectile crest, gallbladder and powder down.

The facial feathers covering the sides of the beak are all things that are rarely found outside the family Cacatuidae.

As I have said before, the cockatiel family all share a distinctive erectile crest and this crest expresses the bird’s emotional state.

When the crest is straight up vertical, the bird is startled or excited.

When the crest is oblique that is its neutral or relaxed state.

When the crest is flattened or close to the head the bird is angry or defensive. Sometimes if the crest if flat but protrudes outwards at the back, the cockatiel or cockatoo is trying to appear alluring or flirtatious.

In contrast to most cockatoos, the cockatiel has long tail feathers that makeup about half of its total length at 30 to 33cm long.

The cockatiel is the smallest of the cockatoos which are generally a lot larger.

There are 22 different types of Cockatoos in the Cockatiel Family. Here are just a few of them:

And of course the Cockatiel

Here are some of the obvious and not so obvious differences when it comes to cockatiels vs cockatoos: