Here is some more interesting cockatiel information, including how the cockatiel bird became domesticated. 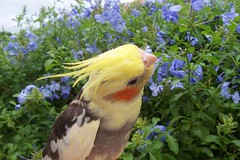 Cockatiel birds as pets are second in popularity only to budgies.  The reasons are mainly because of their hardiness, curiosity, adaptability and gentle disposition it seems.

Cockatiels have also charmed many people with their cute appearance and lovable personalities.

Others are enchanted by the cockatiels whistling abilities, cleanliness (you have to admit they do smell good) and long potential lifespan.

In fact, cockatiel birds can be exceptional pets that reward their owners with years of entertaining companionship.  In return, the cockatiel asks for only some attention and care from their owners.

How Did The Cockatiel Bird Become Domesticated?

The cockatiel bird has been a very popular pet for most of the twentieth century and according to the American Pet Product Manufacturer Association, out of the estimated 16 million pet birds that are kept in American homes, 34 percent of them are cockatiels.

From craving constant attention to creating dust, the Cockatiel is a curious creature. This book is a great buy for any cockatiel owner, and you will learn a lot about your little-feathered friend.

Did you know that when a cockatiel grinds his beak, he is showing that he is happy and content?

As you probably already know, the cockatiel originated in Australia, which is also home to some fifty other parrot species.

In Australia, the cockatiel is sometimes called the quarrion, the weero, the cockatoo parrot or the crested parrot.  In the wild, small flocks of two to twelve cockatiels gather together to live in Australia’s interior and feed on seedling grasses and various other plants.  Their habitats range from arid grasslands to open eucalyptus savannas.

Cockatiel flocks are very dependant on rainfall for water and once a steady supply of food and water are available, they will start with their breeding season.

Cockatiels in the wild are most active during the early morning and late afternoon.

Your pet cockatiel bird, funnily enough, will still show these same characteristics, as they are noisier in the early mornings and early evenings.

Cockatiels spend a large part of the day on the ground, searching for food, but spend the middle of the day blending into their surroundings by sitting lengthwise along dead tree branches that are free of foliage.

The cockatiel was first seen by naturalists who visited Australia with Captain James Cook in 1770.  It is also believed that the first cockatiel specimen came to the Royal College of Surgeons Museum in England as a result of this trip.

The Australian government put a ban on the exporting of all native birds and parrots in 1894, so all the cockatiels in North America and Europe have resulted from domestic breeding efforts in these countries for more than 100 years.

John Gould compiled some really interesting books around that the time that colonists started flocking to Australia in search of gold. Most of his books were on birds and each species was carefully and beautifully illustrated in lithographic hand-coloured prints. The poses were natural and the background study on each bird was phenomenal.

At the time a great proportion of these bird species were completely unknown to science, and this put whoever first described them in a very advantageous position as eminence in the world of ornithology then could be largely earned by the number of new species a person could describe.

Gould was eager to be the first to examine these fresh species for his books. He and his family landed in Tasmania in 1838. He wrote and his wife did the illustrations.

The family moved to the mainland of Australia and then in 1840 returned to England and almost immediately began to publish the first parts of the books on Australian birds.

The demands for live Australian birds as zoological exhibits and household pets, as well as stuffed ones to decorate glass cages and the hats of women, is said to have begun with the publication of his books.

Gould was also the first person to take live budgerigars out of Australia, but it is not known if he also brought cockatiels out. Cockatiels were first bred in Europe in 1845.

Gould named the cockatiel the ‘cockatoo-parrot’ and by 1864 cockatoo-parrots were very well known as pets, because they were being brought in from Australia in considerable numbers.

At the time the most flourishing importer of exotic livestock into Britain was Mr Jamrach, whose business continued to flourish under his heirs until the first world war (1914-1918) stopped it altogether.

It was Mr Jamrach, the founder, who coined the far more popular name of the cockatiel.

By 1884 the cockatiel was extremely well-established as a breeding bird in European aviaries and in English speaking countries.

In 1902 David Seth-Smith wrote that the cockatiel was so well known that a description seemed almost unnecessary and that except for the budgerigar, the cockatiel was by far the commonest Australian parrot in English aviaries where scores were being reared annually.

Despite the ease with which the cockatiel had slipped into domestication, it is nevertheless true that until the Australian authorities forbade the export of native birds in 1960, further wild-caught ones still continued to be brought into Europe and America.

Unfortunately, documentation as to how the cockatiel bird became popular in North America is lacking. Evidence shows however that the cockatiel had far more popular as a cage bird in America and South Africa than in Europe.

Before cockatiel mutations came in the cockatiel was never really that popular as an aviary bird, as people probably preferred to house prettier birds or rarer parrots.

The cockatiel got the name ‘beginners’ bird and was popular among novice bird keepers as they bred so easily. 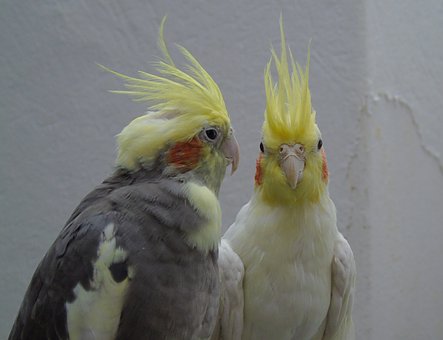 The first recorded colour mutations for cockatiels happened in the USA and was piedness, although before that Mrs E L Moon had been breeding light and dark coloured grey cockatiels, some of which were said to be so light that they were almost white in colour.

The pieds, like most piebald animals, were at their most attractive when the pale areas are symmetrically placed making them neat and uniform in their pattern. Otherwise, the pale areas so disrupt the normal appearance that they have a curious rather than a pleasing appearance.

Unfortunately, this has happened with so many of the avian mutation, no one bothered to record its early history. Pieds, or harlequins as some term them were already established before 1951.

The next cockatiel bird mutation was cinnamon, and it took place in New Zealand. In 1958 the first Lutinos where hatched in Florida.

The phenomenal commercial success of the lutino and pied after they were imported into Europe opened the eyes of many bird breeders as to the scarcity and value of these strangely coloured parrots.

People who managed to acquire pairs of these new coloured cockatiels found that they were in a position to, metaphorically, breed money.

The demand for these cockatiel bird mutations was so great that most breeders found that they needed a waiting list for prospective buyers. The prices asked and received were ridiculous and cockatiel birds had become big business.

Obviously, once the overall numbers of these cockatiel mutations increased, their value was diminished.

By the 1960’s knowledgeable people actively sought to acquire any abnormally coloured cockatiels they could find.

The Dutch and the Belgians seem to have been most successful in this search. It was also them who largely developed the deep canary shade of selected lutinos. They were also partly responsible for developing the opaline (pearled or lace) variety. The cinnamon was found in 1968 in Belgium and the red-eyed or fallow the year after that.

Of course, now breeders had a much better understanding of genetics and could now perfect their management so that now there was no comparison with the early history of the pied and lutino mutations which had taken years and years to become established in any quantity.

The market for cockatiels collapsed by 1975 and it would have collapsed a few years earlier were it not that the South African government coincidently eased the restrictions on the importation of the birds. This conveniently emptied the birds from European aviaries.

Birds were also stolen often, and it is said that the originator of the red-eyed silver lost his entire stock to thieves.

At present, the price of any cockatiel bird bought from the breeder is about twice or three times more than a perfectly coloured grey cockatiel. The exception is fallow or red-eyed which retails at about ten times the value of a normal cockatiel.

The money-making phase that cockatiel mutations went through has been beneficial for aviculture.

It has brought the breeding of captive parrots from a hit or miss affair to become practically a science.

For the first time, breeders began to give thought to the nutrition of the parents and the chicks. They now provide more suitable nest-boxes and tried to completely supervise the entire breeding cycle.

Prior to this breeders never used to interfere, because it might have caused the parents to desert the chicks. The is definitely more to parrot breeding that simply having a breeding pair, a nest box and plenty of patience.

If you have any other cockatiel information to add, please comment below.