When it comes to bird anatomy, most pet bird owners have no clue about how the organs work and how the skeletal system is formed. You might not think this topic is interesting or even relevant, but it is very complex, and if you are wanting to care better for your birds, there are some basics you should know.

The Basics Of Bird Anatomy

Here I will be looking mainly at a cockatiel’s bird anatomy as this website is mainly focussed on cockatiels, but a lot of the bird anatomy discussed here applies to all the parrot species.

Cockatiels have a high oxygen demand because of their high metabolic rate. This means that they have a respiratory system that is much more efficient than the one a mammal or reptile has.

The respiratory system is divided into lungs and airbags and serves them well in their capability to fly.

The trachea divides into two bronchi. The lungs themselves are small and spongy-like. One of the interesting characteristics of the respiratory system are the air sacks. Their mission is to dissipate liquids and restore the gasses that the bird breathes.

As the liquids dissipate, the cockatiel can somewhat control his body temperature and prevent it from rising too much. As a bird breathes, air flows through the lungs to the air sacks in the tempo of the movement of the ribs and sternum – going through the vasculature twice.

As the bird flies the muscles moving the wings cause the air sacks to widen and shrink and this causes the air to rotate between the lungs and airbags.

When it comes to their circulatory system, birds have a four-chambered heart, which is the same as most mammals. This means that they can get nutrients to their body as well as oxygen very easily.

A bird’s heart is going to beat much more quickly that a mammals heart, due to what they have to do to survive. They need much more oxygen in their blood to help them with flight.

The digestive system of birds is very interesting. Most of them have a muscular pouch that is called a crop which is formed along their esophagus.

It helps them to soften food, as well as regulates the flow of that food through the bird’s system because the food can be stored in this pouch and used as needed.

The Skeletal system of a bird is interesting as well. Because the bird is intended to fly, the skeleton is adapted for this. It is very lightweight, which would allow the bird to get off the ground. On the other hand, it is very strong and pliable, so that it doesn’t break when a bird takes off or lands. 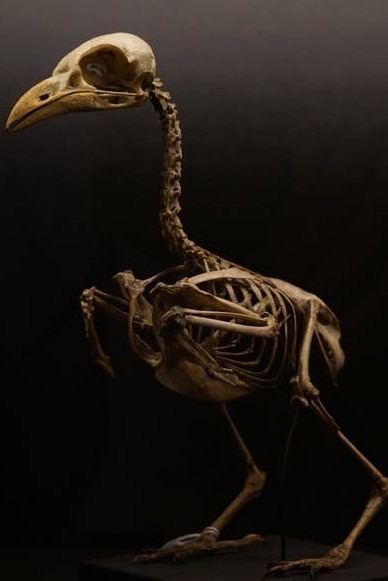 The bones are hollow in order to allow them to be lightweight.

Cockatiel’s sternum is quite flat, but the other side is more protruding and attached to the chest muscles. If you can’t feel the sternum with your finger, the cockatiel is probably overweight. If you can feel it too clearly, the bird is probably too skinny.

The breast bone is not very flexible in birds.

There are five lumbar vertebrae fused together, thus making the cockatiels back quite stiff as well.

Instead, the neck of the bird is very flexible thus you see it sleeping with its head turned backward with its beak embedded in its back feathers.

The skull is attached to the vertebra with one condyle that is formed from bones that are fused together. The mission of the skull is to protect the brains that are located inside the round-shaped braincase. The eye sockets are very large. The length of the skull is around 2,2-2,7cm.

Cockatiels don’t have teeth. Instead, they have a hooked beak.

The tail is attached to a stub tailbone called the pygostyle.

The forelimbs were developed through evolution and formed as wings.

Looking at the wing bone structure, you can see the same elements as the human hand would have. The wing has three fingers: the thumb, middle finger and ring finger, although these are clearly atrophied.

The legs and feet are developed for multitasking. Cockatiels use their feet to move, sit, scratch and catch objects.

The femur is very short, unlike ours which is the longest bone in the body. The knee of the bird is hidden amongst the feathers. The tibia and instep are longer. So, unlike mammals that use mostly the knee to refract their legs, birds use their ankle.

An integral part of the structure of the foot is the “intertarsal bend,” which is a fusion of the ankle bones of the calf and shin bone. It’s that larger “ball” of the leg that resembles a knee turned to the opposite direction. The whole foot structure is made for agile climbing.

Birds also have a wide range of muscles, usually about 175, that are going to control how the bird moves.  The largest muscles in birds are the breast muscles, which control the wings and makeup about 15 – 25% of a flighted bird’s body weight.

The urinary system is the bird’s waste removal system. The kidneys’ main function is to process and remove wastes from the blood.

Humans have bladders where urine is collected. Birds don’t have a bladder, instead, the waste extracted by the kidneys travels to the cloaca where they exit the body along with solid waste materials.

A bird’s high body temperature and level of activity mean that they need to conserve water. Because of this, their urinary system is designed to operate differently from humans.

The urinary systems of most animals produce urea which needs to be dissolved in large amounts of water to be excreted from the body.

Instead, birds produce uric acid that can be discharged as a thick paste along with their feces. This is the white chalky part of the bird’s droppings. A bird is able to urinate independently of defecating or passing feces, but most of the time, the bird will pass urine and feces at the same time.

As all the birds do, cockatiels have brilliant vision, in fact far superior to our own. 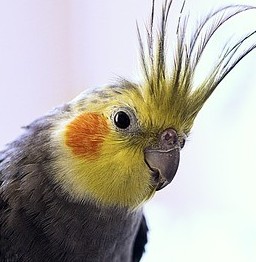 A parrot’s eyes work without depending on each other. The retina is huge and bright. The fact that the eyes are positioned to the sides of the head means that the field of vision is wide.

A small blind spot forms to the very front and back of the head but this little “flaw” is replaced with a very flexible neck.

Whereas a human can see red, green and blue light, parrots see red, green, blue and ultraviolet light reflections. So, they can see UV colors. It is also said that they may see colors we aren’t even aware of.

Ultraviolet colors matter when choosing what to eat, especially when they live in the wild.

Cockatiels can detect 1,200 pictures in a second (Forbes, 2007), comparing to humans who can see about 20 pictures per second and even less in dim light.

All in all, the anatomy of the cockatiel is very interesting and also very different from that of mammals.

If you understand bird anatomy you will better understand your pet and how to handle him.